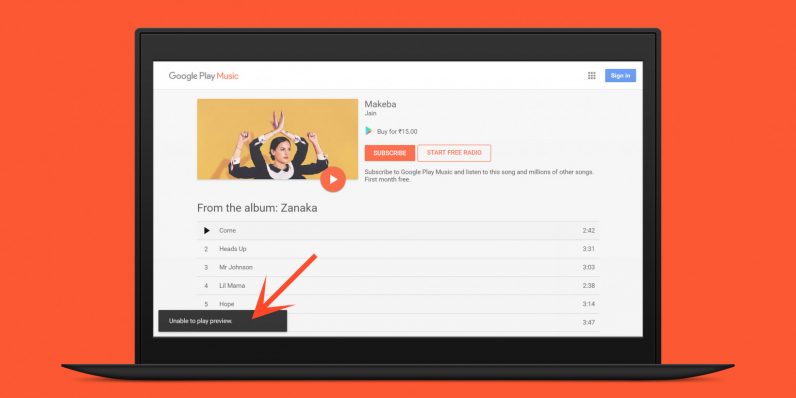 After holding off for years, I finally bit the bullet and started using streaming music services this year: I started with Apple Music when it launched in India, and then moved on to Google Play Music, because I’m fairly deeply invested in Mountain View’s suite of apps.

It’s great for listening to entire albums like I did on my iPod, discovering new artists, curating playlists, and even streaming rare tracks that I only have on my local hard drive. Unfortunately, I can’t share that joy with any of my friends in India, because they can’t hear a single Google Play Music song until they subscribe to the service.

The bug seems to only affect users in India; when I tried launching a playlist in my US VPN-equipped browser without logging into Google, the tracks played just fine. Even Play store links like this one work as expected – but that doesn’t help matters when you want to share a song, album or playlist from the app.

It isn’t clear if this is a technical fault or an issue with Google’s music licenses in India: I’ve been tweeting at the company’s concerned Twitter accounts about this since July and haven’t received a single response. But it’s a big enough problem that there’s no way people can trial the service, as well as the best part about a streaming app: sharing tracks.

I’m writing this with the selfish premise of getting Google’s attention so the company fixes this and lets me do my thing, but it certainly wouldn’t hurt Mountain View’s business to get more people to use and recommend its streaming music service in a growing market that’s expected to grow to 275 million listeners within the next three years.

Besides fumbling on music sharing, Google also doesn’t promote its Play Music service in online or traditional advertising in India yet. Meanwhile, rivals like Wynk are using YouTube ads to showcase their extensive libraries; local incumbents like Gaana and Saavn claim to have more than 20 million users apiece on their platforms. Heck, even Apple Music is doing a better job allowing people to hear music on its service than Google’s, in the country.

So please, Google, even if you don’t care about a single ranting journalist who’s itching to share his fire playlists with friends, fix your crappy Play Music bug for a shot at more money; there’s going to be $475 million up for grabs by 2020. Thanks for listening.