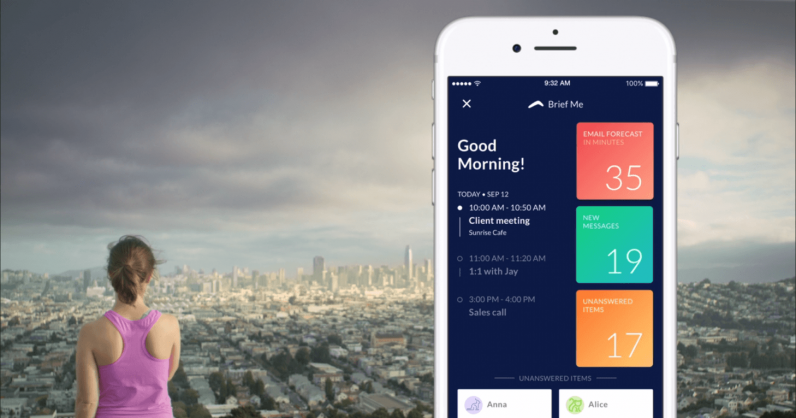 I spend a lot of time in my inbox. Dealing with the hundreds of pitches, follow-ups, and angry emails I get each day is basically a full-time job. I really wish that wasn’t the case though, but until someone builds an app that deports tech publicists to a land where there’s no Internet, and the words “hope you’re well” are punishable by death, it’s my cross to bear.

Or then again, maybe not. Enter Boomerang. We covered this email tool way back in 2010. Its schtick was you could control when you send and receive email. I kinda love that idea; work-life balance is important, but smartphones have pretty much entirely undermined that idea.

Now, it’s introduced an AI assistant, which uses machine learning and NLP (natural language processing) tech to do much of the heavy sifting for you. Put simply, it reads your email for you, and tells you what it thinks you’ll care about, leaving the irrelevant chaff and garbage marketing emails to one side.

Boomerang now has a little microphone icon. When you tap that and say “brief me,” the app takes you to a briefing page, which contains highlights from your inbox, along with some analytics. It’ll show you, for example, how long it’d take you to clear your inbox, if you made a concerted decision to sit down and play catch-up.

Scroll down, and you’ll see relevant highlights. I was actually really impressed with what Boomerang thought I’d be interested in. It was all pretty spot-on, although that’s largely because it’s based on my personal usage patterns, like the emails I choose to open, and the ones I ultimately reply to.

Boomerang also highlights relevant passages from emails. I was really impressed with how this worked. On one email inviting me to an event in London, the passage selected contained the all the pertinent details of the event (like the name, address, and time). It pretty much skipped the “Hi, how are you, long time no speak” part.

That said, the accuracy of the voice recognition itself isn’t perfect. I tried asking Boomerang for our Editor-in-Chief, Alejandro Tauber’s, phone number. It thought I wanted “Ali Hondro’s” number. Perhaps it’s just my Northern English accent, but I don’t recall having a similar issue with Siri or Google Now.

Anyway, Ali Hondro is a much better name, and I plan to continue using it until my employment is eventually terminated with cause.

Another caveat: At the moment, Boomerang’s voice-driven AI can be pretty slow, especially if you’re trying to do a big query. That’s to be expected though, especially if your inbox consists of thousands of items, and grows faster than the Elephant Man’s face.

Briefings are, in my opinion, the coolest part of the new Boomerang app. But the assistant does so much more. It actually lets you verbally identify things in your email just by asking (“Find me Barry White’s phone number” or “Find me the PDF from Susie”). That alone is pretty cool, because who hasn’t spent hours delving through an inbox looking for a flight itinerary, or some concert tickets, or something. Sexy.

You can also reschedule meetings and calendar events, perform mass-deletes, and sort-and-filter through the mess, just by speaking to your phone. Essentially, it’s a context-aware version of Siri.

Boomerang markets itself as a productivity tool for high-powered go-getters. And that’s almost probably true. But it’s also pretty handy for those of us who are innundated with emails, and want to spend less time keeping on top of their inboxes. It’s an email client for people who hate email, essentially.

This is just baked into the app. Arguably Boomerang’s best feature is the ability to perform actions on an individual email, simply by swiping right-to-left, and selecting an option. It’s all very fluid and beautiful, and it works so well. Boomerang prioritizes expediency above all else.

Boomerang’s new AI assistant is available from today. You can download the app for iOS here.

Read next: Smartphones are killing Americans, but nobody’s counting