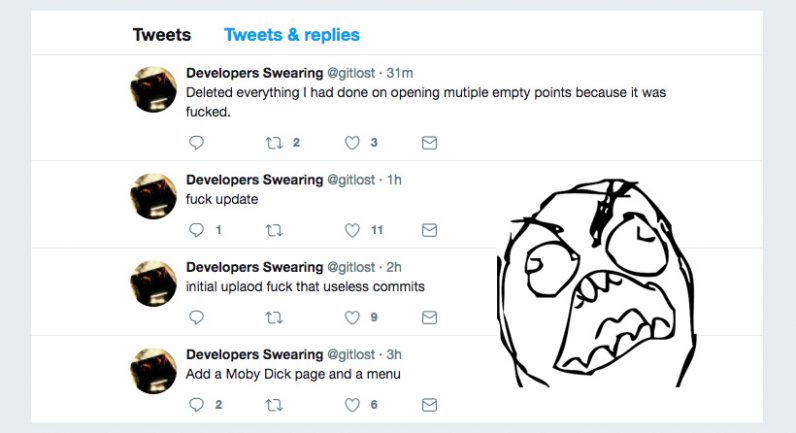 Developers sure have a penchant for ranting and spitting wisecracks at the most unusual places. So much so that one bored Microsoft programmer has built a Twitter bot that tweets anytime a developer swears publicly on GitHub.

Yes, that is apparently a thing. Built by MS Azure software engineer Will Pearson, Gitlost is a hilarious bot that scavenges the GitHub API for commits containing profanity and then goes on to surface them on Twitter for everybody else to read.

In fact, it is pretty damn funny. Here are some the best entries as of recently:

STEFANO, WE WENT OVER THIS. C++ IO SUCKS.

"Get that shit outta my master."

One thing to keep in mind is that Pearson refrained from programming Gitlost to add links to the commits where the profanities in question appeared. The reason was to prevent opportunistic devs from using the bot for publicity stunts.

This is what he had to say about this:

I made a decision not to save that information so that people don't try to get on gitlost intentionally for publicity reasons.

Since first launching back in 2013, the bot has retweeted more than 40,000 obscenity-ridden commit messages. In all fairness, some of these were not strictly profanities, but rather contained strings which could be interpreted as such – something more commonly known as the Scunthorpe Problem.

Add a Moby Dick page and a menu

But the best part is that GitHub users continue to supply it with fresh malediction everyday: The bot tends to tweet at least about 10 times each day – which should be more than enough to brighten up your day.

Read next: Could we build a Blade Runner-style 'replicant'?