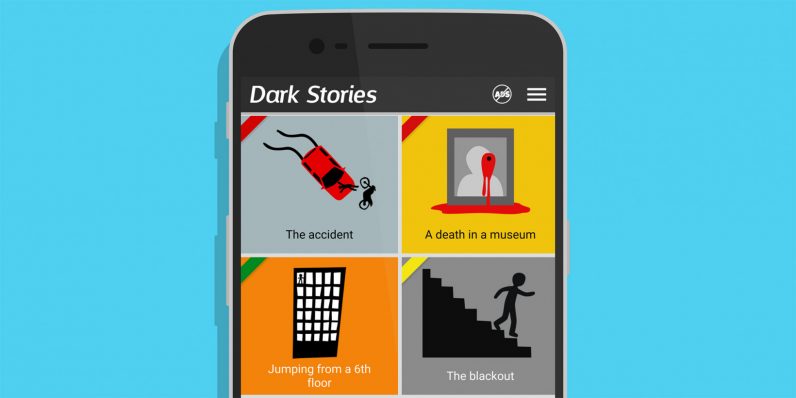 My family went on plenty of road trips when I was a young lad, and they made for some of my happiest childhood memories. One of those I recall fondly was a game we played to pass the time as we covered hundreds of kilometers driving to and from our favorite destinations – and I recently rediscovered it in the form of an Android app.

As far as I know, the game doesn’t have an official name – but I’ve found a bunch of apps on Google Play that go by variations of ‘Dark Stories.’ Essentially, it’s like the spoken game 20 Questions – only, instead of having players guess what animal, place, or object you’re thinking of, they have to deduce the sinister circumstances that lead up to the situation you describe in a short sentence or two.

Here’s how it works: people take turns being the narrator, and read aloud the scenario described on a card in the app. The narrator also reads the solution that’s provided, but doesn’t reveal it to the group. After hearing the scenario, the other players must then figure out how it took place, and can piece the puzzle together by asking the narrator questions about it. However, the narrator can only answer by responding with ‘yes’, ‘no’, or ‘that’s not relevant.’

Depending on how sharp your group is, or how you’d like to play, you can choose to allow the narrator to drop hints, and whether you’d like to limit the questioning by setting a timer or deciding on a fixed number of questions. The scenario in the screenshot above is fairly simple, and the solution (click here) should give you an idea of the sort of reasoning required to crack these puzzles.

What’s great about this game is that it gets you talking with your loved ones, something that few mobile games manage to achieve. I also love that everyone gets a shot at playing narrator, so it keeps things interesting for as long as you care to play.

I loved this game when I was little, because it never failed to bring my entire family together, whether it was on a road trip or a reunion with relatives. We also looked forward to people bringing in new and more challenging scenarios to figure out – the more twisted they were, the better. And after rediscovering it a few weeks ago, I found it to be just as fun to play with friends new and old for hours on end.

Give it a go by heading to Google Play and grabbing Dark Stories, which is free and includes 93 scenarios divided into three levels of difficulty. There are similar apps out there, but their puzzles aren’t great.

Have you played Dark Stories before, or know a source for more of these puzzles? Let us know in the comments.