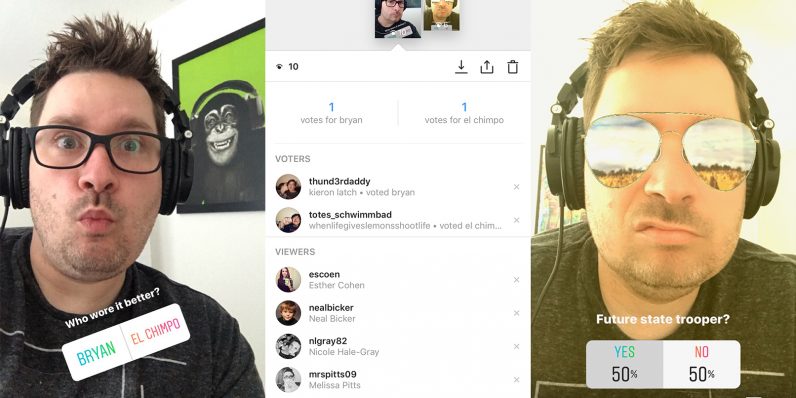 Polly has been on a roll of late. Today, though, that roll may be slowing.

A Snapchat integration for polling, the popular third-party app connects to the platform and allows users to add simple multiple-choice polls in Stories, the ephemeral hotbed of millennial activity. Instagram, doing what Instagram does, just added the feature to its own Stories feature: news Polly (and Snapchat) certainly didn’t want to hear.

Today we’re introducing an interactive poll sticker in Instagram Stories that lets you ask a question and see results from your friends and followers as they vote.

Whether you’re trying to plan tomorrow’s outfit, choosing which class to take or figuring out where to go for dinner, now it’s easy to share a two-option poll right in your story. After you’ve taken a photo or video for your story, select the “poll” sticker and place it anywhere you’d like — you can write out your own question and even customize the poll choices.

For Snapchat, the feature-jacking is just the latest in a series of moves by rival Instagram that started with the Stories feature. Once a Snapchat exclusive, Instagram unveiled its own version of Stories last year and has since run away with the millennial market. Snapchat, the once “can’t-miss” IPO, is now trading at approximately half of its original value while struggling to maintain a once-insatiable millennial audience.

That audience appears to be fleeing for greener pastures offered by Instagram.

Whether you agree with what Instagram is doing or not, it’s hard to argue against its effectiveness. By integrating popular Snapchat features into an app already teeming with millennials, you’re decreasing the need to switch between services for exclusive feature sets.

And polls, for Instagram, is an engagement goldmine. Rather than rapidly thumbing through Stories, polls offers the opportunity to hook your following with an in-between offering that could catch those ‘tweeners not wanting to comment, but willing to engage on a more casual level. Simply put, it’s engagement on demand and a fine accompaniment to an app that’s growing more feature-rich by the day.

Read next: Microsoft made a Halo minigame for mixed reality