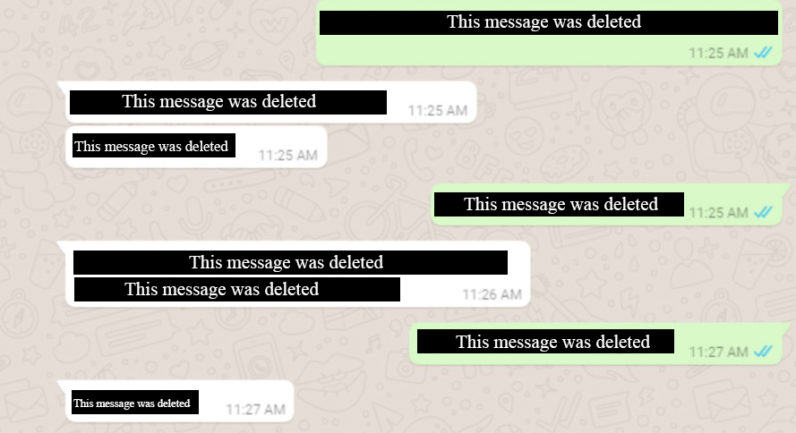 Following in the footsteps of fellow messenger apps like Telegram, WeChat and Viber, WhatsApp is getting closer to rolling out its ‘Delete for everyone’ feature, which lets you wipe out messages you sent by mistake before your contact has had a chance to read them.

The company has finally begun testing the functionality on Android and iOS devices, serial WhatsApp leaker WABetaInfo reports. According to the insider, the dedicated recall server is now working and successfully deleting messages.

Still, most users still won’t have access to the feature and will likely have to wait until the Facebook-owned messenger eventually enables it remotely for everyone.

What is particularly nifty about this feature is that, according to screenshots obtained by WABetaInfo, recalled texts will also disappear from the Notification Center – both on Android and iOS gadgets.

Here is how deleted messages will show up in notifications:

WhatsApp for Android: when the sender deletes the message for everyone, it will be updated in the Notification Center too [AVAILABLE SOON] pic.twitter.com/69fFUrXl35

WhatsApp for iOS: when the sender deletes the message for everyone, WhatsApp will delete it in the Notification Center [AVAILABLE SOON]

Rumors about the unsend feature first began circulating the web when crafty users started noticing signs of this functionality in WhatsApp’s code, speculating the company could’ve enabled it a few months back in June.

In fact, ‘Delete for everyone’ has already appeared in an August beta version of the app for Windows Phone, which is a pretty strong indication it could soon make its way to Android and iOS. Unfortunately, there’s not yet a clear timeline when this might happen, so continue to stay vigilant with your texts until then.

Read next: PETA settles monkey selfie court case – but at what cost?