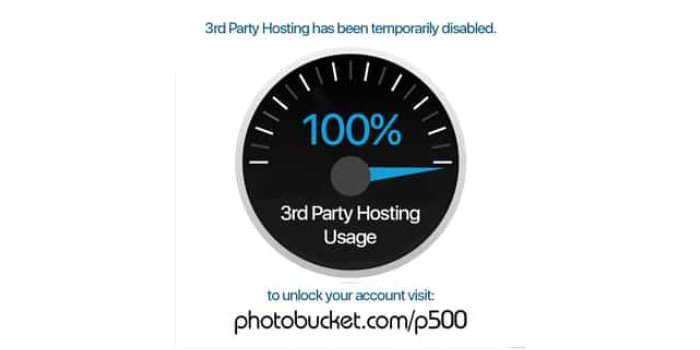 Image hosting site Photobucket is facing plenty of backlash on social media and its support channels as it recently made a massive change to its terms of service that affected loads of users in the worst way possible.

Near the end of June, the Denver, Colorado-based company introduced a fee for serving images displayed on other sites – like an Amazon or eBay product listing, or even pictures in forum post and on blogs. That came as a rude shock to many of Photobucket’s 100 million customers, who found a notification in place of their images on on other sites, like the one you see above.

you are a DISGUSTING company @photobucket this is 100% blackmail. I have years of blog content on your platform, now forcing to pay 400/year

The kicker: users couldn’t simply pay or upgrade to one of Photobucket’s standard plans, which start at $6 a month. Instead, their only option was to pony up a $400 fee for the annual subscription to the Plus500 plan, which allows third-party hosting. Even its $40 monthly fee wasn’t available as an option for some reason.

Blogger Lauren Wayne noted that she couldn’t even download her images off of Photobucket, as even the pictures stored in her library were replaced with the notification banner.

As the BBC notes, the change to the hotlinking feature was mentioned 500 words into the updated terms of service document; it wasn’t mentioned in the blog post announcing the news on June 26. Some users noted that they learned of the update only when they spotted the notification banner where their images should have been.

This isn’t just a disservice to Photobucket’s users and their audiences, it’s also a fine example of how to lose customers and their goodwill. The company is well within its rights to charge people for a valuable service, but there’s simply no excuse for failing to notify them adequately, and offer a grace period along with affordable plans to accommodate as many people as possible.

It’s not uncommon for online services to begin charging for premium features – but there’s a right way to go about it, and a wrong way. If you have plans to start charging your customers for something they’ve been able to access for free, be sure to look at how Photobucket has handled this situation – and then do the exact opposite.

We’ve contacted Photobucket to learn more and will update this post if there’s a response.

Errata: We previously noted that Photobucket’s change affected some Etsy product listings, but this is not the case as the platform serves images via internally hosted web servers and cloud based hosting, such as Amazon S3. We regret the error and have since updated this post.

Read next: Snap up classic ninja FPS Shadow Warrior for free on GOG and Steam