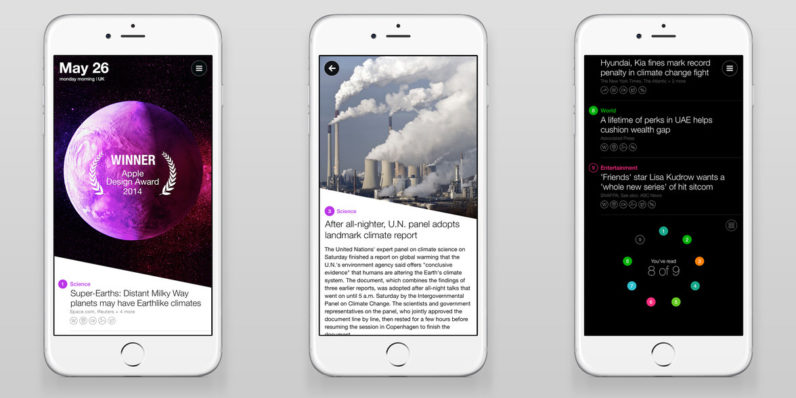 Under former CEO Marissa Mayer, Yahoo failed to build anything truly exciting over the past five years – except for a single truly notable app, Yahoo News Digest. Now, under the reign of its new owner Verizon, the company is killing off one of the best mobile apps I’ve ever used.

It’s really as simple as an app can get: every day at 8am and 6pm, News Digest would prompt you to swipe through a handful of important stories from around the world, summarized for quick reading and accompanied by photos, fast facts and figures, and tweets to help you make sense of it all. It’s been my go-to app for following world news since 2014, and I’m sorry to see it go.

The app didn’t just do a good job of delivering news efficiently, it also offered the most enjoyable user experience I can recall in any recent mobile service. And it did so without having to rely on design principles dictated by Google or Apple – it features a design language that’s all its own, allowing Yahoo to create a unified experience across Android and iOS, without compromising on its usability and appearance.

There’s no fluff between you and the news, and nothing pestering you to sign up or invite friends, share content or buy things. When you finished reading the stories in your digest, you’re presented with an interesting quote or fact that’s connected to the day’s events – and that’s it. You can simply close the app and get on with your day. That’s a masterclass in UX design right there.

It also manages an incredibly difficult feat – creating a persistent but easy-to-adopt habit among its users. By consistently delivering a high-quality service that I know will only take a couple of minutes of my time and alerting me when a new digest is ready, the app became a part of my daily routine, and I’ve installed it on every phone I’ve used in the past few years.

With the app set to shut down on June 30, Yahoo is urging people to migrate to its Newsroom app. A company spokesperson told TNW:

We are migrating News Digest users over to the Newsroom app. This is something that has been on the roadmap for a while and is an opportunity for users to get the same great news coverage but the added bonus of being able to join the conversation with a passionate community and world class editors.

I’m just a couple of minutes into testing it, and I hate it already – the front page has news about Kim Kardashian complaining about her recent pictures being Photoshopped, and I can’t find a way to hide that story or unsubscribe from that topic, even after signing in.

There are ‘vibes’ that I can choose to follow, like ‘Vegas Golden Knights’, ‘Tupac Shakur’ and ‘OJ Simpson’ – none of which I care about. A profile page of some sort is prompting me to ‘post something’ – but for whom? Worst of all, Newsroom attempts to present an unending stream of stories in the hopes that I’ll spend more time in the app, when all I want to do is learn about what’s going in the world in a finite amount of time and move on to other activities.

Yahoo is shooting itself in the foot by doing away with the best app it’s ever built. Farewell, News Digest – you’ll be missed, and I can only hope that others learn valuable lessons in how to create a fantastic user experience from your service.

If you’re in the business of designing and developing mobile products, you owe it to yourself to check out News Digest before it’s shuttered once and for all at the end of the month. Find it on the App Store and Google Play.

Read next: Uber's in more trouble than ever for stealing self-driving tech from Google