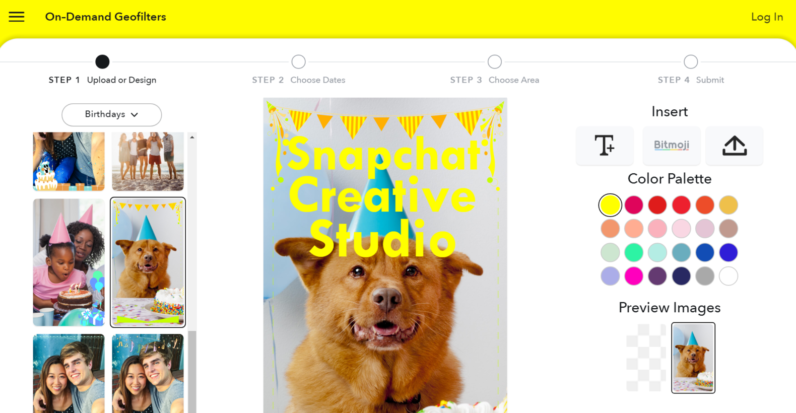 Snapchat introduced the ability to let you create your own Geofilters – effects that are only available in specific physical locations – early last year, and later added an online design studio to make the process much easier. Now it’s expanding the design studio with five new categories.

The tool initially launched with Birthday, Celebrations, and Weddings categories, but has now added Prom, Business, Food & Bars, Love, and Graduation to it’s arsenal. Each category then has various templates you can modify by entering your own text, changing colors, or adding your own graphics (including Bitmoji).

COME IN
Snapchat’s clearly looking to expand geofilters beyond businesses and into something everyday people may want to use for their own events. As before, you’ll have to pony up some cash to activate the filters, with prices varying depending on dates and coverage.

The minimum area is 20,000 square feet, which should easily cover most peoples homes with a bit of buffer room. For a 24-hour period, that was only about $9 for an area around my Brooklyn apartment. Not too bad a price to pay if I were trying to have a super nerdy party, but prices ramp up quickly if you need wider coverage.

I’m not a party person myself, but if you want to try your hand at a filter of your own, head on over to geofilters.snapchat.com.

Update: This post previously said the Geofilters Design Studio had just launched, when it in fact launched last year. The post has been updated to reflect this, and we regret the error.

Creative Studio, from Snap on ProductHunt

Read next: Uber and Lyft are coming back to Austin