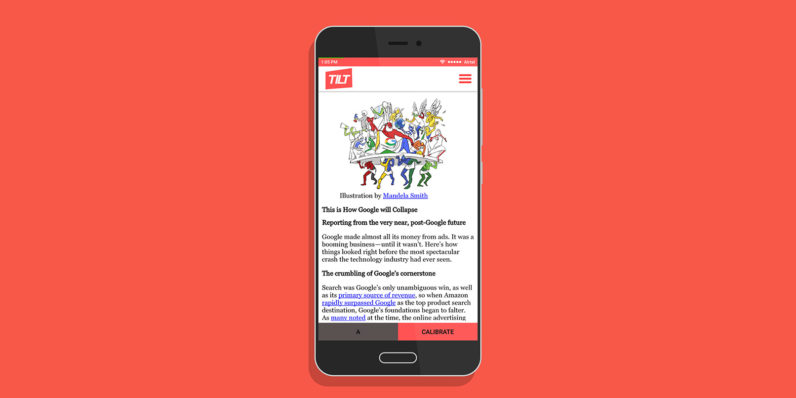 There are many ways to improve the reading experience on mobile device. As some quality ebook and read-later services like Google Play Books and Pocket have shown, allowing users to adjust fonts, screen colors and brightness can certainly help cut down on eye strain.

Now, how about reducing the need to touch the display ever so often? The folks behind a new app called Tilt are touting its main feature – the ability to scroll through articles simply by tilting your device up and down – to get people to try its new product.

Tilt-to-scroll isn’t by any means a new feature – it’s been available through third-party apps on Android and iOS for years, but most of them require you to root or jailbreak your device first and then grab the necessary tweak from an alternative app store.

But it’d be great to see more apps incorporate the feature to make it easier to read on your phone – similar to how every app worth its salt now has a dark theme for reading at night. Instapaper’s read-later service already offers it, but I’d love to use tilt on Reddit browsers, clients for Twitter and Mastodon, image-based networks like Instagram and Imgur, as well as browsers.

Being able to tilt to scroll means you can enjoy your content more easily, particularly on larger devices. I imagine that as more phones lose their bezels – as that seems to be the big design trend for 2017 – this could come in handy to allow scrolling while helping to avoid accidental touches on the screen with the sides of your palm.

As for Tilt’s own app, it still has a long way to go: its calibration could use a little more fine-grained control and there’s only support for Medium posts at present. Still, if you’re intrigued by the idea of not having to stretch your thumb to read blog posts, give it a try by grabbing the free app from Google Play.