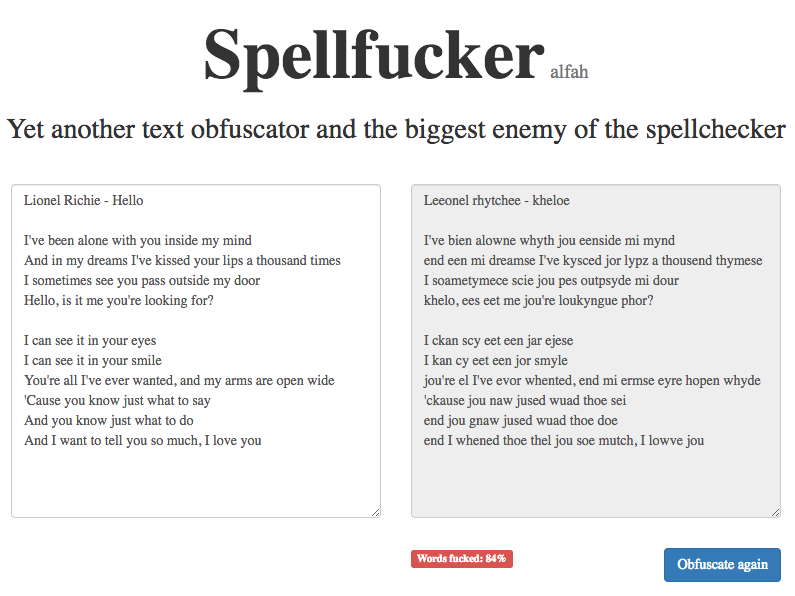 Spellfucker is a new text obfuscating tool that changes the input text into coherent gibberish that humans can make sense of, but not computers. This means it would make it more difficult for bots to exploit information about you, for example, targeting ads based on what you type.

There’s already some other apps out there with similar functions, like Text Obfuscator and Bbboing, but most of them are quite easily reversible which can make it easier for pesky AI to figure out.

That’s why Spellfucker tries to bring text obfuscation to the next level, by randomizing replacements to make reverting processes more difficult. You can obfuscate any text a number of times and get new results. And according to Spellfucker’s creators, the cool thing is that the text is still readable — although that might be debatable.

The project is still in experimental status so users shouldn’t rely too heavily on it as a way to bypass non-human readers. At the moment not all patterns have more than one replacement and the algorithm is far from being fully optimized when it comes to performance.

Also, Spellfucker’s creators admit that some words are still difficult to understand — but you can be the judge of that. If you’re interested in helping Spellfucker stick it to the machines then you can contribute to the code on Github.

Read next: Google teams up with Huawei for high-end Raspberry Pi rival that runs Android