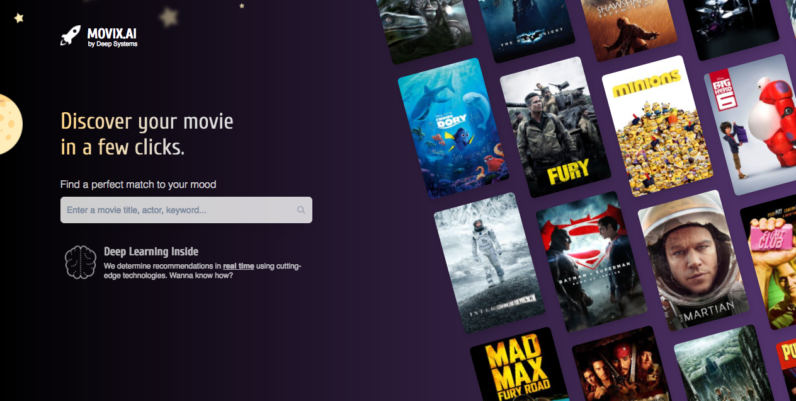 It turns out that in addition to making spooky trailers and writing quirky scripts, artificial intelligence is also pretty damn good at making awesome movie recommendations.

Available for free, Movix is a web-based recommendation service that uses deep learning algorithms to adapt to your capricious film preferences and hit you with the most suitable movie suggestions in real-time.

What is particularly nifty about the AI-powered tool is that it requires no registration, allowing you to get started in a matter of seconds. All you need to do is feed the algorithm with your favorite titles and it will immediately begin spitballing tons of movie suggestions it deems you’re likely to appreciate.

According to creator Deep Systems, Movix works best when provided with at least five to 10 movies to inform its suggestions. Co-founder and AI researcher Yuri Borisov further says that using the additional filters for year, rating and genres will make it even easier for the app to make suitable recommendations.

Having fed the algorithm with five of my favorite flicks, Movix predicted my taste pretty accurately, even though I had already seen – and enjoyed – its first 10 suggestions.

As Borisov told TNW, Movix sources data from popular movie services IMDB and Movie DB to for tags and descriptions, but ultimately relies on a customized neural network architecture based on long short-term memory methods to offer film suggestions.

Try out Movix here and let us know how well-suited its recommendations were down in the comments.