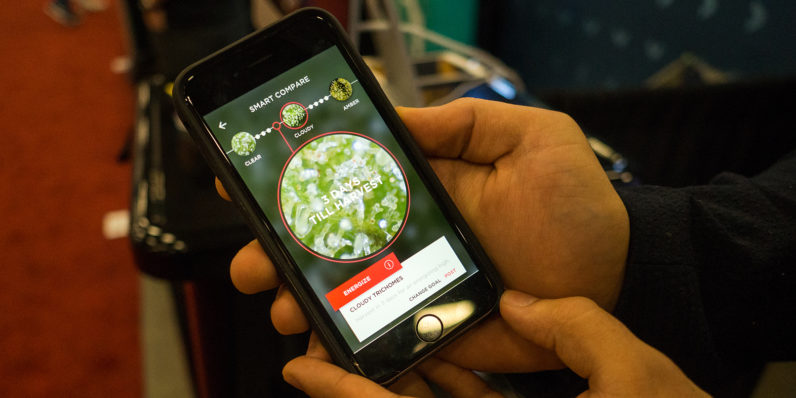 The future for weed growers is an exciting one. Innovative companies like Snaphash, which I visited with today, are taking a forward-thinking approach to the centuries-old cannabis business. The upcoming product aims to ensure higher yields, fewer problems, and an Instagram-like ability to show of your work to other craft or large-scale growers.

Snaphash is both an app and a hardware product. The latter offers an iPhone module that aids your existing camera in taking magnified macro images of your plants. It works, but it’s nothing to write home about — yet, at least.

The application, however, is where the product shines. When opened, you’re met with a wall of images, like a sort of cannabis social network — think Instagram, but for pot. The wall shows off your plants, as well as those of your friends and allows you to like and comment much like you would on any other social network.

When paired with the camera, though, the wall of weed images takes on a different approach. Dubbed “Bud Rx,” there’s an in-app platform for sharing photos of problematic plants and trying to diagnose what caused the issue. After uploading the photo, you’ll be met with the option to tag images and share with your community in an attempt to fix what ails your sick plants.

You can also scan potential grow locations and a augmented reality-ish feature analyzes the site to give you the optimal location and setup to match the space.

Why is it important?

Marijuana is big business, and it’s only a matter of time before it scales into the most popular cash crop in the United States. If you’re in a state where it’s legal, the app and hardware product could give you a bit of guidance in starting your grow — whether to move into a bigger site later, or to just ensure the quality and yield of each plant.

The iOS app is coming soon, but doesn’t have a release date just yet.

Read next: This cute dancing robot is actually a 3D-printed teapot hooked to an Arduino