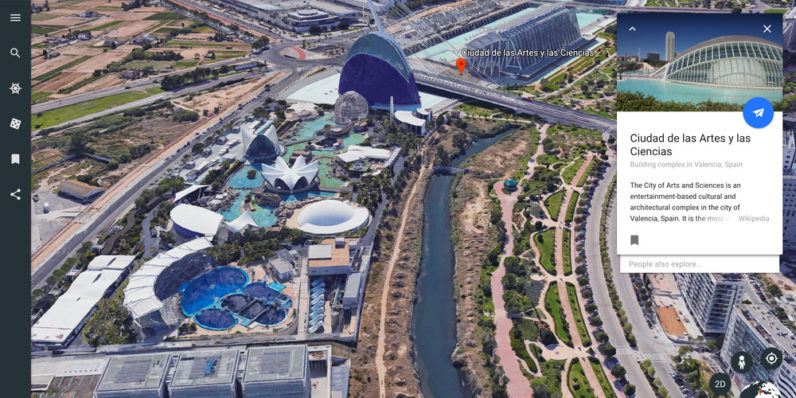 In its first major update in two years, Google Earth has added a bunch of new features that should make the virtual globe app a lot more fun to play with.

Up first is browser support: you no longer need a dedicated desktop or mobile app to view Google Earth as it now loads in Chrome with all its bells and whistles.

Next, the update introduces 3D maps for select locations so you can whizz through them and enjoy oodles more detail than with traditional satellite imagery. Start with the majestic Grand Canyon, and the beautiful Château de Chambord manor house in France.

You can dive into one called National Treasures to learn about various wildlife habitats around the globe, along with the good folks at BBC Earth; there’s also one for fans of Mayan culture that begins in Mexico with Lola, from Sesame Street’s Girl Muppets Around the World.

There are already more than 50 Voyager stories to choose from at present, and more are slated to be added each week. Plus, if you’re using the Android app and a particular spot catches your fancy, you can send a digital postcard of it to your contacts.

About 20,000 points of interest around the map now have Knowledge Cards loaded with history and facts about the place you’re looking at; you can also find related places by flipping through them.

As is the tradition with Google apps, there’s also an ‘I’m Feeling Lucky’ button to whisk you away to a random location so you can learn about a new destination.

With that, Google Earth is now a lot more interesting for students and globetrotters of all ages. You can try it by visiting earth.google.com in Chrome or by grabbing the Android app. The new version will be available in other browsers as well as iOS soon.

Welcome home to the new Google Earth on The Keyword

Read next: How waterfalls and soundscaping can make open-plan offices less awful