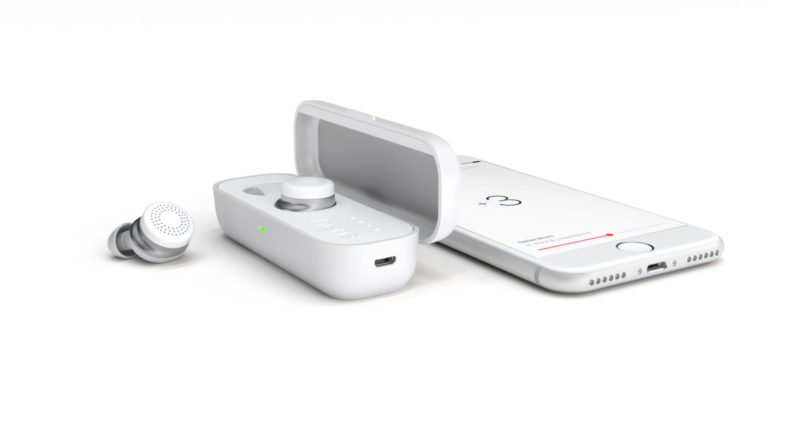 On the top floor of the Hilton in Austin, where I was trying to escape the crowds of SXSW, I gained a new superpower. A few meters behind me, two colleagues were having a quiet conversation, shit-talking about someone named Todd – and I could hear it all. Todd sounded like an asshole. Fuck you, Todd.

Normally, I wouldn’t have been able to hear what the two were whispering about how Todd always claims ideas that aren’t his, but the earbuds I was wearing clearly amplified how he micro-manages the shit out of everyone.

Doppler Labs, a company that started out a few years ago making advanced earplugs, had lent me a pair of their Here One wireless earbuds – “the first earbuds with Real-World Sound Control,” as their website states.

Or, as Doppler’s CEO Noah Kraft put it when I talked to him a few weeks later: “We’re trying to make hearing perfect for you.” The buds block out all sound passively, which means that all sound that comes through is picked up by the on-board mics, processed in the buds and passed on to your eardrums.

This on-board computing allows the buds to do something Kraft calls “selective cancellation,” basically meaning you can tune out airplane noise but let through voices, or “EQ your environment” by turning up the bass, if that’s what you’re in to.

“The best analog for Here One is the iPhone; a product that wasn’t a phone but a pocket computer. The Here One is very factually a computer for your ears,” Kraft tells me.

And to be honest, wearing them felt that way. There are a few rare moments when you get to try out something that gives you the feeling it can fundamentally change certain things in life: the first time you reach out and grab the HTC Vive’s controllers while not actually seeing them, or the moment you downloaded your first app and realize there are thousands more to be explored.

The Here One’s gave me my first taste of what an augmented layer of sonic reality can do for your quality of life. The app that comes with the buds gives you the option of different ‘Filters’ for different environments. The Airplane filter reduces the jet engine noise to a gentle whisper, the City filter cancels out traffic and wind noise, and the Office filter suppresses even the most violent keyboard abusers.

Kraft is quick to tell me that they’re not into noise cancelling though: “Most other companies are out to create silence to stream music or audio. Our silence isn’t about streaming music. What’s more, there are different versions of silence: we’re into selective cancellation, and that just gives you so much more control.”

First of all, earbuds are so unobtrusive that after a while one simply forgets you’re wearing a device that’s offering an alternate version of reality. Second, audio creates a strangely intimate connection to the virtual overlay. It’s literally closer to your brain and it really feels that way.

“This is the first step in ambient computing, a way to seamlessly interact with your computer,” Kraft tells me. “You see all these people walking around with their heads down, tapping on their phone. That would be obsolete if we can create an elegant product that lives in the ear.”

I asked him if they were in any way inspired by the Spike Jonze movie Her, the first movie that really showed how intimate a connection can become with a virtual being that “lives in the ear.” Kraft laughs and tells me they started working on the product before the movie came out, and all it inspired them to do was double their efforts because others would undoubtably be jumping on the bandwagon.

There are some similarities to the movie, though. “In our labs we’re currently training it to talk to you. Other companies want you to swipe your jaw or nod, we’re not into that stuff. We want the earbuds to be aware, to ask you ‘Do you want me to turn Spotify on?’ when you walk into the office, and all you do is tap your ear.”

Kraft is most excited about the possibilities the earbuds could offer in real-time translation. Apparently Doppler has a working version of live translation in their labs, that will be rolled out to users at some point in the not too distant future. “That just breaks boundaries, man, the difference between reading a translation and hearing it are night and day.”

Of course, most of the future applications we talked about are just that, future applications. At the moment, the buds do sometimes suffer from Bluetooth connectivity problems and the batteries don’t last much more than three hours. Also, the ‘tap’ required to turn on a nifty bypass of noise-cancellation is more of a ‘forceful smack the side of your head.’

But as Kraft says, “It’s not perfect yet, but that’s why it’s called the Here One.” In six months, he tells me, the product will “fundamentally evolve into something different,” thanks to software updates. He likens it to how Tesla keeps tweaking their cars with updates, improving battery life, and in this case “huge updates for the filters.”

“Someone is going to own the ears, make an OS for the ears. We’re starting at the foundation, focussing on making the Here One as robust as possible,” Kraft tells me, adding “and then we want to open it up for others on this fun, fun topic,” hinting at a future sort of developers platform and App Store.

I, for one, can’t wait for that. Carrying a computer in your ear that communicates with you without other being able to notice sounds great. Not to mention the “superhuman hearing” it offers, as Kraft calls it.

“Sometimes I put the earbuds in and guys at the office know now that I turn on the amplification and directionality and just look around, listening in,” which sounds suspiciously like the way Todd might use these earbuds. Fuck you, Todd.

Read next: The best newsletters for people who love music