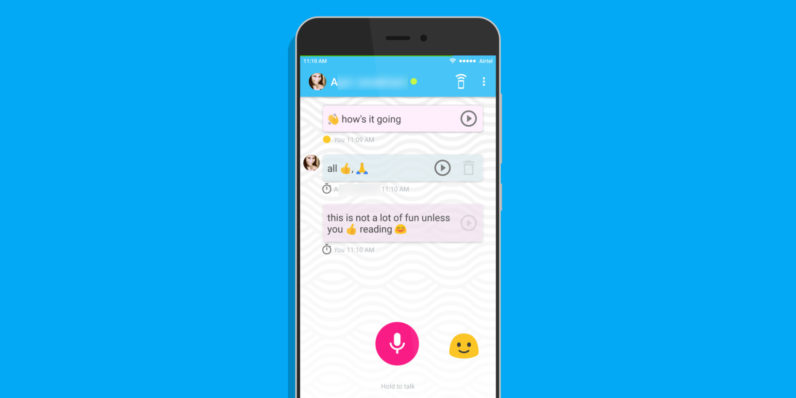 Earlier this week, we told you about Uptime, a video sharing app from Googlers who participated in the company’s Area 120 internal incubator for side projects. Now, the initiative has launched its first Android app.

Supersonic is a messaging app that relies almost exclusively on voice input: hold down the mic button to dictate a message, and you’ll see it transcribed into a text and emoji-studded message in your one-on-one or group conversation. Your contacts can also play back your audio message, and it’ll disappear once it’s been heard. There’s also a lounge where some users can list themselves to be added to chats by strangers, but I couldn’t figure out how to get in there myself.

The app launched earlier this month on iOS and is only available in certain regions (India’s not on the list, for example). It’s an interesting take on a chat app and might find fans among younger users. However, I couldn’t really wrap my head around listening to a bunch of disparate voice recordings on my speakerphone or translate emoji quick enough to carry on a conversation naturally. Yes, I’m old.

Area 120’s previous release, Uptime, presented users with a neat way to enjoy videos together; while it wasn’t the best possible experience I could’ve imagined, it was different enough that I could see myself inviting friends to try it with me. I’m not sure I can say the same for Supersonic just yet.

The incubator has also birthed Tailor, an iOS app that lets you talk to professional stylists to figure out what to do with your wardrobe, learn what pieces will complement your outfits and find items to buy online

You can try Supersonic by grabbing the free iOS or Android app right now.

Read next: There's now a game in which you build your own gaming PC