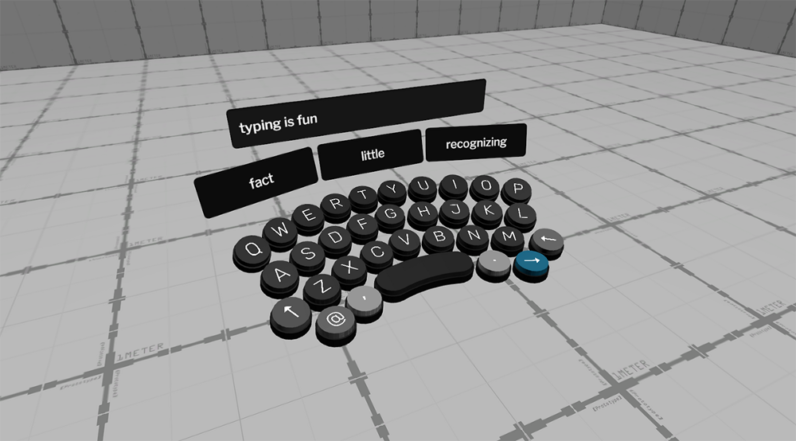 Typing could be quite the ordeal when both of your hands are full – and this is particularly true for virtual reality, where you constantly have to keep a tight grip of your joysticks to maintain control over the experience. But one resourceful designer has found a handy way around this inconvenience.

Independent VR developer Jonathan Ravasz has built a nifty keyboard functionality for virtual reality experiences that lets you type without having to let go of the controllers. The PunchKeyboard is fundamentally a visual input interface that lets you use the joysticks to type in VR.

While visually it resembles a typewriter, the app has been enhanced with autocomplete and next-word prediction functionalities to further simplify the typing process. The predictive feature currently sources data from Reddit conversations, but Ravasz assures it can be easily filled up with custom dictionaries too.

Here’s a little video demo that will give you a better idea how the PunchKeyboard works:

In case you want to learn more about the PunchKeyboard, Ravasz has documented the approach and the motivation behind the app in a detailed blog post here. But to give you some more context, it was created in Unity and written in C#.

The project was inspired by Google’s own interpretation of the VR keyboard:

Ravasz has also included an executable demo file you can find in this GitHub repository, where you can also take a peek at the code behind the PunchKeyboard. The coolest thing about the app is that it is completely open source, which means you can make changes to it as much as you want.

As this Redditor explains, the PunchKeyboard might not be readily available to use in already released games, but developers can easily integrate the tool if they opt to do so.

Check out the PunchKeyboard here.

Read next: This extension randomizes your Reactions to hide your true emotions from Facebook