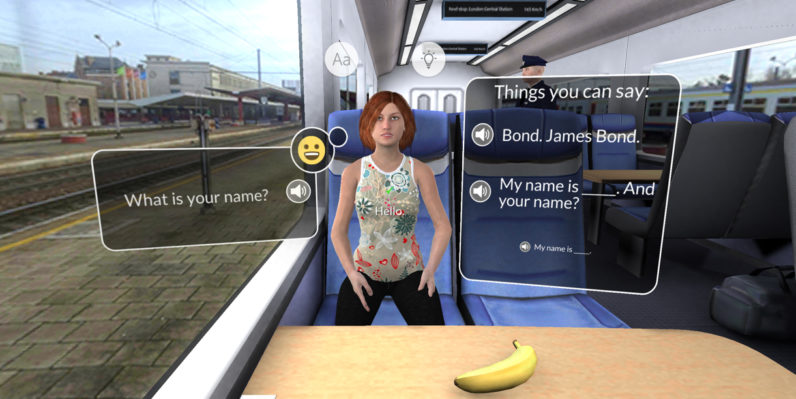 Experts agree that language learning is best accomplished with full immersion. Most of us, unfortunately, can’t pack up and head to Tokyo for a year to learn Japanese.

Mondly, a language-learning app on iOS and Android, thinks VR could help bridge the gap. And today it’s launching an app for Gear VR owners that, in my experience, is the closest thing you can get to actual immersion without putting pants on.

First, some background. After my first year in Mexico, I was struggling to pick up the language. I used Mondly, and others, to improve my vocabulary and help me to speak more conversationally. Neither worked. Aside from the canned phrases offered on Duolingo, Mondly, and others, I really couldn’t advance the dialogue into something resembling conversation.

My problem wasn’t vocabulary — which these apps are wonderful at building — it was recall and recognition.

Recognition came with time. It’s simply a matter of understanding that native speakers don’t sound like the voice actors on your app of choice, and altering the way you hear patterns of speech. As for recall, there’s really not much you can do to recall words and phrases faster other than to actually use them. Unfortunately, the apps commonly available only allow train you to use your knowledge in the context of a canned conversation. If your real-life conversation partner deviates from the script, you’re left scrambling to find the right words.

Immersion works. I can attest to that. But what about immersion via virtual reality?

Mondly is a bit gimmicky at first. The lessons are typical of those you’d find on the existing Mondly app, but unlike the iOS app, for example, the background starts to fade and it feels closer to a real conversation. Granted, it’s a cartoon woman on a train asking what my favorite sport is, but the rapid-fire question and answer sequences force your brain into something resembling real immersion.

The microphone is quick to snap you back into reality each time it makes listening mistakes such as hearing “he’s my potato” when you’re attempting to say “he’s my dad” in Spanish. Aside from some temporary frustration, though, it’s about as close we’ll get to real immersion, at least for the time being.

Virtual reality offers real opportunity for language learners, and while Mondly’s app is nice, it’d be hard to imagine a scenario where a major player in the space — looking at you Duolingo, or Rosetta Stone — don’t jump into the fray with something far more elegant.

Still, for a free app it’s definitely a cheaper option than travel.

Read next: ‘Project Badass’ packs 30 minutes of laughs into a 4 minute VR experience