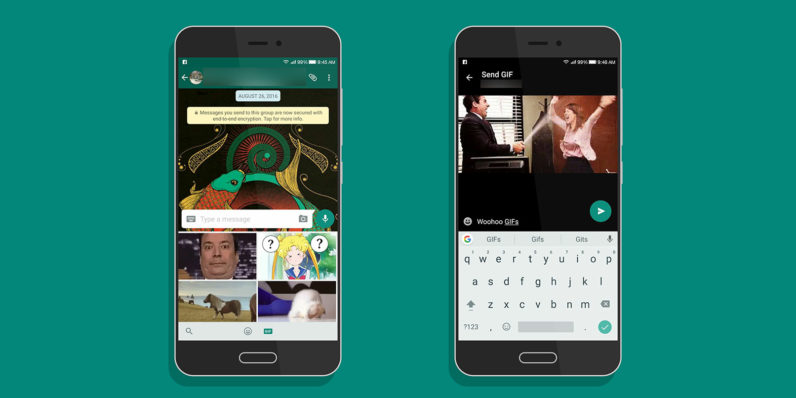 WhatsApp took its own sweet time adding support for GIFs to its messaging app on Android, and even with that, it required users to bring their own animations to the party. Thankfully, that’s about to change.

A beta version – v2.17.6 to be precise – includes a new feature that lets you search and send GIFs from Giphy’s massive library (or Tenor for some users, as I discovered while testing it on my phone in India). You can invoke it by tapping the emoji button next to the text input field and then toggle between emoji and GIFs from the new bottom bar.

WhatsApp’s iOS app was updated with support for GIFs last November, which was awfully late considering the fact that virtually every other messaging app offered the feature. But at least it allowed users to pick GIFs from Giphy or Tenor and embed in their conversations from day one.

In addition, this version also increases the number of media items (photos and videos) that you can send at once, from 10 to 30. However, it’s worth noting that both these features aren’t available in the more recent beta version, v2.17.8.

We’ve contacted WhatsApp to find out when GIF search will become available more widely. If you’d like to try it right now, install the v2.17.6 beta by grabbing the APK from APK Mirror.

Read next: Is Fitbit gearing up to take on the Apple Watch?