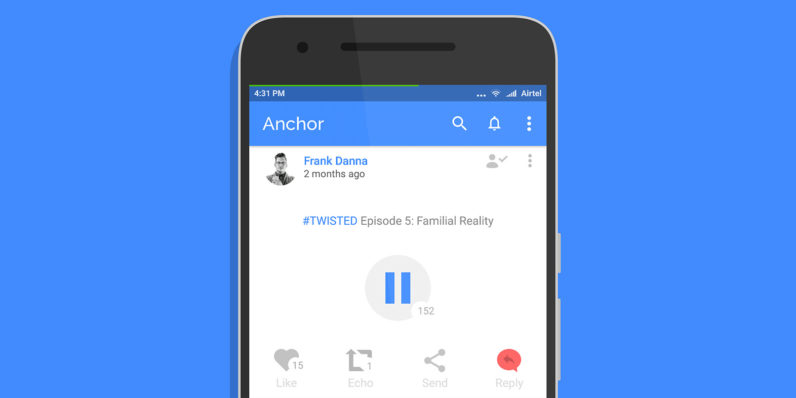 Following its launch on iOS in February, Anchor is now available for budding podcasters on Android.

The app lets you record and listen to podcasts on its network that are only up to two minutes long. You can like and save individual episodes,  share them with your followers and even record a reply of your own.

Anchor takes all the fuss out of recording a podcast: All you need to do is hold the phone to your ear (as you would to answer a call) to record, or tap and hold the big red button. When you’re done, you can post it to the Anchor community and also share it on Twitter.

Currently, it feels like a spoken-word version of Instagram, and that’s certainly not a bad thing. However, if you’re used to hour-long podcast episodes like I am, it might take a little while to get used to the shorter format, both as a listener and a podcaster.

Like the iOS edition, Anchor’s Android app is well built, with a smart onboarding process and an easy-to-navigate interface. In addition to recording waves, you can find stuff to listen to by browsing curated categories and hashtags.

With its Android launch, Anchor is set to open up its network to a much larger community of mobile users – but it remains to be seen if it can gain serious traction. That might boil down to a question of whether the time is right for this sort of app.

Some big-name podcasters on the platform wouldn’t hurt either; Radiolab signed up seven months ago but hasn’t published anything new on Anchor since then. Hopefully, the company will be able to get major contributors excited with the prospect of reaching a larger audience across the globe.

If Anchor sounds like your cup of tea, you can give it a try by grabbing the free app from Google Play.