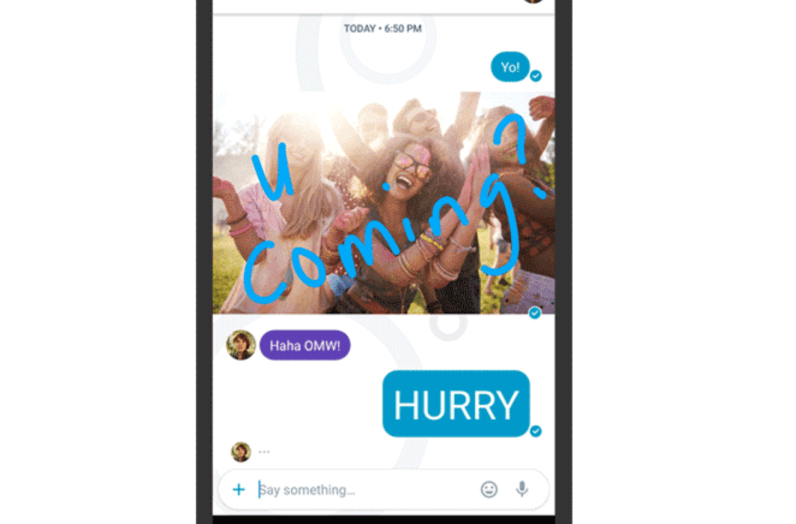 Today at Google I/O, CEO Sundar Pichai announced some new tweaks for Google Photos, which he says now has over 200 million users. You’ll now be able to communicate via Photos with two new apps — yes, really.

A new messaging app named Allo is a “smart messaging app” that learns over time to be more expressive and productive. It’s based on your phone number, so there’s no fussy sign-up process to worry about.

It also has the new Google Assistant built in, so you can both chat with friends and Google Search.

In Google’s example, a feature in Allo called whispershout adds a slider to your chat window that scales the sixe of your text, and add text overlay to images.

There’s also a smart reply feature that assumes you’ll say something like ‘so cute!’ when someone shares a picture of a baby, which it learns over time as you use it. It recognizes pictures because it taps into Google’s powerful image recognition engine, while your replies are learned via text.

Allo can also make reservations for restaurants, if you want to meet up with friends. It can find sports scores, show you the roster of players; basically, a lot of what Google Search can do. You just don’t need to move away from Allo to tap intothe lighter features of Search.

Allo uses end-to-end encryption, too — at least via an incognito mode (just like Chrome!). You’ll also be able to decide how long messages stick around.

If you’re looking for something similar, Allo is a bit like a private, semi-automated Facebook social layer that you can use privately. It’s also a bit like Messenger, but doesn’t use bots to be smart about how it helps you. Good on ya, Google.

Read next: Google Duo is a video chatting app that lets you see callers before picking up