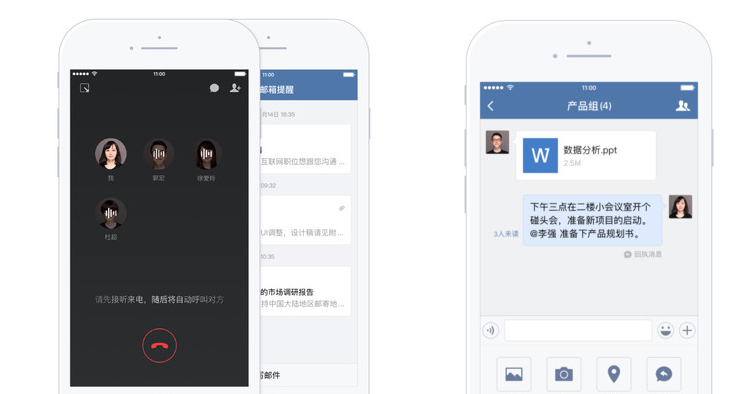 WeChat is ready to take on a new market: the office. The company today launched WeChat Enterprise, essentially its competitor to the ever-growing Slack.

First announced in March, it has most of the features you expect from standard WeChat. You can make groups, send photos, voice clips, files, locations and even stickers. However, it differentiates itself with a few work-centric changes.

For instance, the app has something called a “coffee break” setting, which is basically an away mode. Since the expectation is that you’ll be using the service during all work hours, it’s a nice way to give quick visual notice that you’re currently unavailable.

There’s also a “receipt” button that lets you acknowledge when you’ve read a post – a similar function to Slack’s reactions – so that a workroom isn’t flooded with an influx of “okays.”

Employees can also charge phone calls to a company bill, which should come in handy for making international calls more efficient (not to mention earn WeChat some extra revenue).

In China, the app is particularly notable because it helps users separate work from play in their WeChat Moments stream. As TechInAsia points out, many Chinese companies already use WeChat for work purposes. Having an altogether separate app keeps work and personal feeds apart and avoids distractions.

Unfortunately, signing up isn’t so easy unless you’re already a fairly big business in China: you need an official Chinese business license to register, and there’s no word on if or when the service will be available elsewhere.

WeChat’s competitor to Slack has arrived on Tech in Asia

Read next: DARPA gives the world a peek at its strange new 24-motor drone