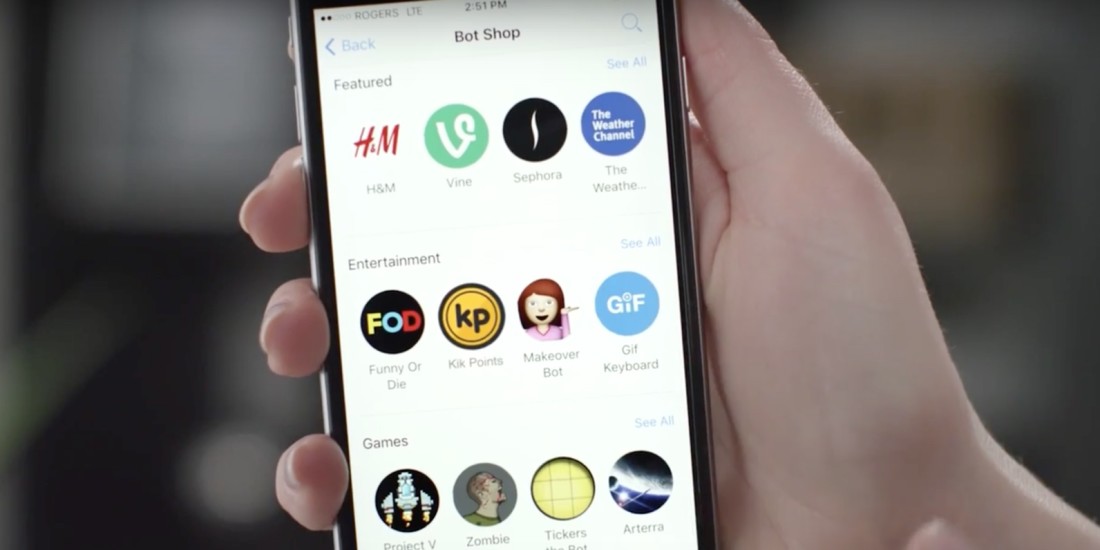 Pretty soon, any messaging app that doesn’t have a platform for bots will be seriously left behind. “Messengers are the new browsers and bots are the new websites,” as Kik‘s Mike Roberts puts it to me.

With this in mind, the messaging app that’s big with America’s youth has today launched a bot store and developer platform to support it.

The Kik Bot Shop offers mini-apps that you can add to your account and either chat to directly or use in your chats with others.

For example, at launch, there’s a bot that inserts relevant Vine videos into your chats at your request, similar to Giphy’s insanely popular Slack integration, and if you do prefer GIFs, Riffsy (which also powers Twitter’s GIFs) has a bot for Kik. A Weather Channel bot can tell you the forecast on demand or send you a regular update, and if you’re looking for beauty tips, Sephora‘s bot has you covered.

There are 18 bots in the store at launch, but Kik is keen for developers to build more. Roberts says that getting started with building bots is a simple affair, with details available on the company’s developer page. And if a brand wants help building a bot, Kik can connect them with bot specialists Imperson, Massively or Sequel.

Given the explosion in the popularity of bots, the time to shine has come companies that specialize in their development. But Eyal Pfeifel, CTO at Imperson – the company that built the Miss Piggy bot for Facebook Messenger last year, among other brand tie-ins – points out that bots have been around for over 20 years.

“Bots aren’t suddenly much more advanced than they were in recent years,” says Pfeifel. He points out that as people increasingly move their communication to messaging apps, bots are coming into play as an efficient and powerful way of allowing companies as a way of converse with or entertain lots of people.

Getting onboard the bot boat

It’s a simple fact that Kik needed to get on board with bots, and quickly. The company boasts 275 million registered users and says that approximately 40 percent of US teens use its app. Microsoft recently announced its bot platform for Skype, and Facebook is expected to launch a bot store for Messenger at its F8 developer conference next week.

Before the month is out, any messaging platform without bots is going to look seriously outdated.