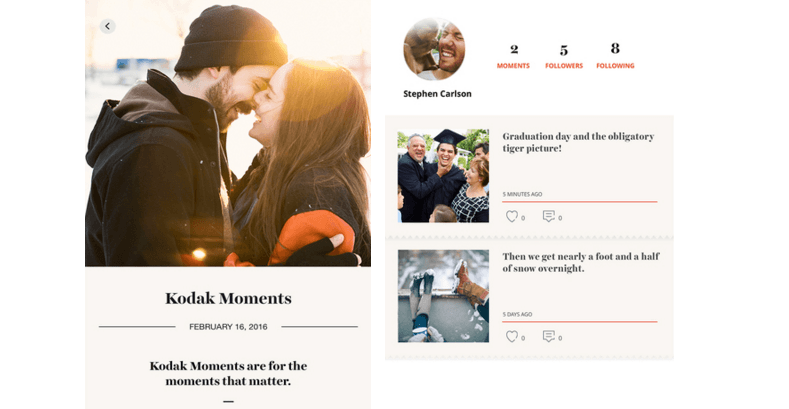 The phrase ‘Kodak moment’ is universally understood as a memory worth sharing. We have Facebook, Twitter, Instagram and Snapchat for sharing those but let’s face it, those feeds are noisy.

From the people you haven’t spoken to in years posting hourly updates of their lives to the endless river of ads, quantity is drowning out quality in a lot of ways on social media.

To that end, Kodak has decided to reclaim its catchphrase and launch an app specifically for saving and sharing your personal, precious memories. The focus is to act as a visual storytelling platform and a refuge from the noise and clutter of other platforms.

Launching today for iOS, Kodak Moments is free to download in the US and will launch in Europe later this year. It will also be available to Android users this spring.

At a glance, the app looks like Medium for your photos. The design is sleek, minimal and very effective.

When you choose the photos you want to post on the app, you can edit them as you would on any platform but what really got me was how you can create stories beneath each post.

The app encourages you to tell the story behind each picture as you’re posting it and helps you format it in a beautiful typeface with a standout block quote as well for added effect.

All of your stories can be kept private or you can choose to make them public, as well as share them on the usual social media platforms too.

The idea is that Kodak Moments acts as a box of memories, rather than somewhere to share pictures of your lunch. That’s not to say sharing food photos isn’t something worth doing, it’s just that they already have a place elsewhere.

Kodak’s VP of Mobile David Newhoff told TNW that after completing a survey of nearly 1,000 active social media users, 65 percent said they found that the sites and apps they use were now “superficial.”

64 percent voiced concerns regarding privacy and another 50 percent said they thought current social media platforms and technology in general were diminishing our communications.

The aim of Kodak Moments isn’t to capture every second of your day so it’s not going to pull you away; it’s meant to be an accompaniment and a way to preserve real experiences, instead of ones constructed for social media.

The platform is ad-free and will remain that way. Newhoff says your photos are safer on Kodak Moments as they won’t be analyzed and used to target you with ads. They are completely private and will only ever be shared with the people you choose to allow see them.

Of course, Kodak has to make money from the platform somehow, so it is offering a printing service direct from within the app as well. You can connect via Bluetooth with any Kodak printing machine in a store nearby or order cute prints with notes and quotes on the back to be delivered to your door.

So if you’re sick of selfies and rants clogging up your feeds and feel in need of a digital sanctuary, Kodak Moments is definitely worth checking out.

Read next: The unconventional hiring strategy your tech startup should adopt