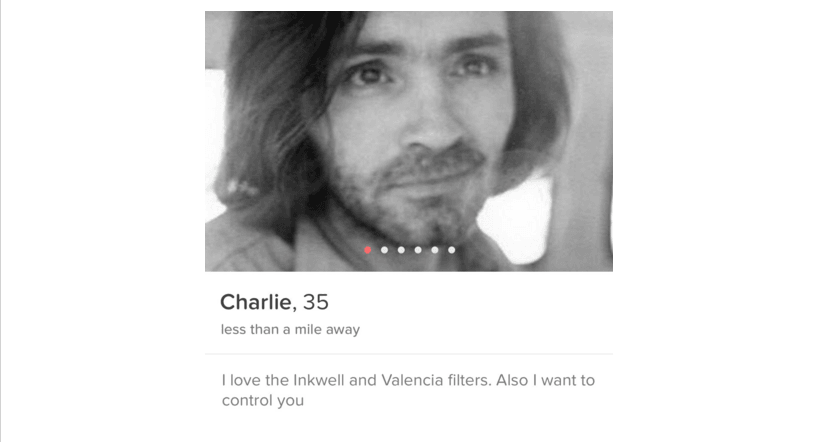 When it comes down to it, matching with a serial killer on a dating app like Tinder isn’t something you can knowingly avoid.

That is, unless the serial killer in question is someone as infamous as Charles Manson or Aileen Wuornos. You would think that two of the most well-known criminals in the world would be recognizable – but apparently not.

After noticing that Manson’s unkempt looks from the 60s looked a lot like the modern day hipster, actress Natalie Walker decided to see how many thirsty Tinder users would fall for him.

And then to make it fair, she added an equally sadistic female to the mix in the form of Wuornos.

Both Manson and Wuornos are notorious serial killers. Wuornos died by lethal injection in 2002 but Manson has managed to avoid this fate due to the abolition of the death penalty in California. However, he will spend the rest of his days behind bars.

Of course, none of this was apparent on their Tinder profiles and both killers managed to garner some admirers.

Charlie got a match!!!!! pic.twitter.com/icwkDZ2mYk

Aileen hasn’t even had to reach out first via message pic.twitter.com/VVcUgVQ8GV

Walker has now been banned from Tinder so Manson and Wournos are no longer active but, despite being a joke, the project highlighted a real issue.

It goes to show that when you take someone like Manson out of context and into an environment we assume is safe, like Tinder, that even with “I want to control you” in his bio, people still swiped right.

Now, I’m not saying that people can’t enjoy a relationship that involves some form of domination – each to their own and whatnot – but it does illustrate that you never really know the person behind the profile picture and people seem to be becoming less vigilant.

In the UK alone, crimes relating to dating apps, and specifically citing Tinder and Grindr, have increased sevenfold in the last two years. The two most commonly reported types of crimes were of violence and sex offences, including rape, grooming and sexual exploitation of children. The number of unreported incidents could make that number much higher.

Tinder, Grindr and every other dating app does what it can to limit criminal activity on the platforms but when it comes to judging the person you’re connecting with, it’s down to you. There is absolutely no feasible way for the companies that make the apps to know whether someone could potentially harm one of their matches – and that’s pretty scary.

There is an ongoing trial in the UK where a man is accused of drugging and murdering four men he met on Grindr between June 2014 and September 2015. And that’s no joke.

Read next: Are too many entrepreneurs a bad thing?