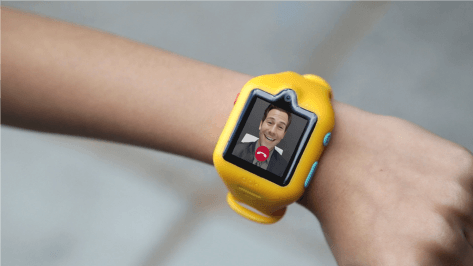 Perhaps the coolest smartwatch yet, DokiWatch leaves even adult wearables in the dust with specs that offer video calls, activity tracking with the help of an interactive pet friend, plus a number of safety features to reassure parents.

Demoed at CES, the DokiWatch runs on Android and has a micro-SIM slot so kids can use it for 3G voice or video calls to home, the latter of which sets it apart, even, from Apple Watch’s current functionality.

And it doesn’t even need to be paired with a handset to get calling.

Kids can receive SMS messages from their parents, although they can only reply with a voice message or send emojis back, but that’s perhaps even better for this audience.

Video calls can only be received from a preset list of contacts, parents can track their kids using a companion app and GPS, and there’s also an SOS mode that records location and sound if they’re in trouble.

DokiWatch also comes with a customizable fitness buddy, DokiPet, to encourage kids to take more steps each day, with badges to keep them motivated.

And when they’ve had enough screen time, you can even remotely enable sleep mode to ensure it’s switched off.

Many kids’ smartwatches focus on low-tech entertainment or activity tracking, all with aesthetics that scream cute rather than cool. Few, if any, offer what DokiWatch says it can.

Having launched its Kickstarter campaign on Monday, the DokiWatch is no doubt benefitting from the opportunity to show the device off at CES, already raising more than double its modest $20,000 target amount.

The LA-based company has a pretty well-decorated top team, with CEO Casper Chien a veteran of Adidas and Fitbit, plus former employees of Lenovo, Apple and Mercedes Benz.

The device is intended to ship in May, according to Engadget.

Read next: What TNW is reading (week 1)