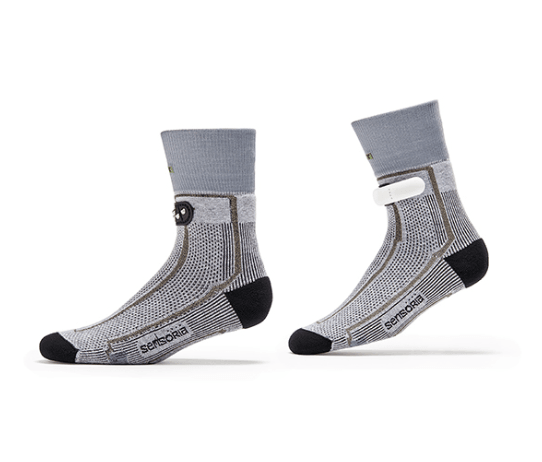 So it’s already a week into the New Year and if you’re anything like me your once-gold-plated pledges to get fitter and healthier have already started to look a little more like fool’s gold.

CES always takes place right after the holidays, providing a great opportunity to look at all the latest tech designed to improve your health, diet and everyday life for a healthy new year.

Trouble is, with so many companies trying to simplify our exercise routine, it’s all started to get a little complicated, not to mention expensive.

So, just how much is it going to set you back to be the you you always wanted to be? And is it all really worth it compared to good old-fashioned, unquantified hard work?

I’m a big believer in avoiding buying bottled water from the store and always have my trusty reusable bottle not far from reach.

In line with this eco-conscious trend, there’s a growing market in smart bottles for those people who want more than just water from their bottles.

My favorite at CES was the Moikit Seed, which is currently overfunding on Indiegogo.

With it, you can track your water consumption and get reminders to drink, all in a rather attractive range of colorful metal bottle.

It also takes hot, as well as cold, water and displays the temperature on the screen on top so you don’t risk burning yourself.

And you can pair it with all of the top fitness apps.

It’s $54 for the largest one, 500ml, and should start shipping in February.

Like any good fake News Years Resolution maker, I’ve just invested in a $60 pair of sneakers that are supposed to be for sports but are really just for looking cool in.

But for a cool $199 I could have got many hands on Altra IQ.

Through the connected app, it can measure time, pace and distance travelled, as well as doing analysis on how you run. You can then act on this to improve your technique, which is something I could definitely do with.

And what shoes are complete without socks? Enter Sensoria, which brought new and improved connected socks to this year’s CES.

One particular improvement is that the app now shows how your running style has changed over time, although they’re still not exactly as cute as my unicorn socks.

A pack of two of these will also cost you $199, which is probably as much as I’ve spent on all the socks I’ve ever bought as an adult. And realistically, smart shoes and socks might be a bit too clever.

One thing that caught my eye this CES was the smart sports bra. Again, while Sensoria’s smart bra doesn’t exactly look amazing, its sensor clips on the outside for a start, if you’re after a heart rate monitor that’s strap-free, this is one of them.

It costs $139 and pairs with all the best fitness apps, but risks being a bit a bit of a one-trick pony with all the other fitness trackers out there.

As a cyclist in London, I’m constantly faced with concerned relatives who think this might be the last time they see me alive.

One device shown off at CES that might just be able to help alleviate those concerns was the Varia Vision.

The standard device displays performance stats, directions and incoming notifications on its eyepiece. And there’s an add-on that acts as a rearview radar to alert you of traffic coming from behind, which is really where the danger is.

This all sounds great, but it does require you to wear sunglasses to attach the devices to, hardly called for in Winter in Britain.

There were a whole load of new and updated smartwatches at CES but it’s the Withings Go that offers the simplicity I think I’m after.

Go can transform from a watch to a clip-on and can accompany you on a run, in the pool and even into bed to monitor sleep.

It’s only $49 and it’s colorful, exactly what I want out of something I’m wearing all the time.

But, can I really expect my body to be a temple without actually knowing how much fat I’ve actually got to get rid of?

Not according to the makers of Skulpt Chisel, a $99 handheld device that measures your body fat and muscle quality in order to tell you how well your training is going, in muscle terms.

It’s just finished crowdfunding on Indiegogo and starts shipping, with the companion app, in March.

Withings has also launched a smart thermometer for those days when you’re feeling a little under the weather.

The company says it can take 4,000 different data points in as little as two seconds just by pointing it at your head.

The data is all uploaded to the app and, given it doesn’t go in your ear, you can even share it with your housemates. And with a $120 price tag, it might be wise to split the cost.

And finally, what New Year would be complete without the pledge to do something about all the junk floating around in your head?

At CES, we took a go of Muse’s headset and app that aim to help you meditate better. Which would maybe help you forget you just spent $299 clearing your wallet in order to empty your mind.

All in all, this New Year, New You CES shopping list would set you back a slightly eye-watering $1,658, which was actually helped by choosing one of the cheapest fitness trackers on the market.

The latest Fitbit is $199 and the new Casio would set me back $500 when it comes out in April, not to mention if I’d plumped for the Audi Fit Driver concept car.

There’s clearly lots out there to help you understand more about how to be a better you in 2016, whether it’s all useful and necessary is another thing.

Read next: Apple may be working on completely wireless in-ear Beats headset as upgrade to Earpods