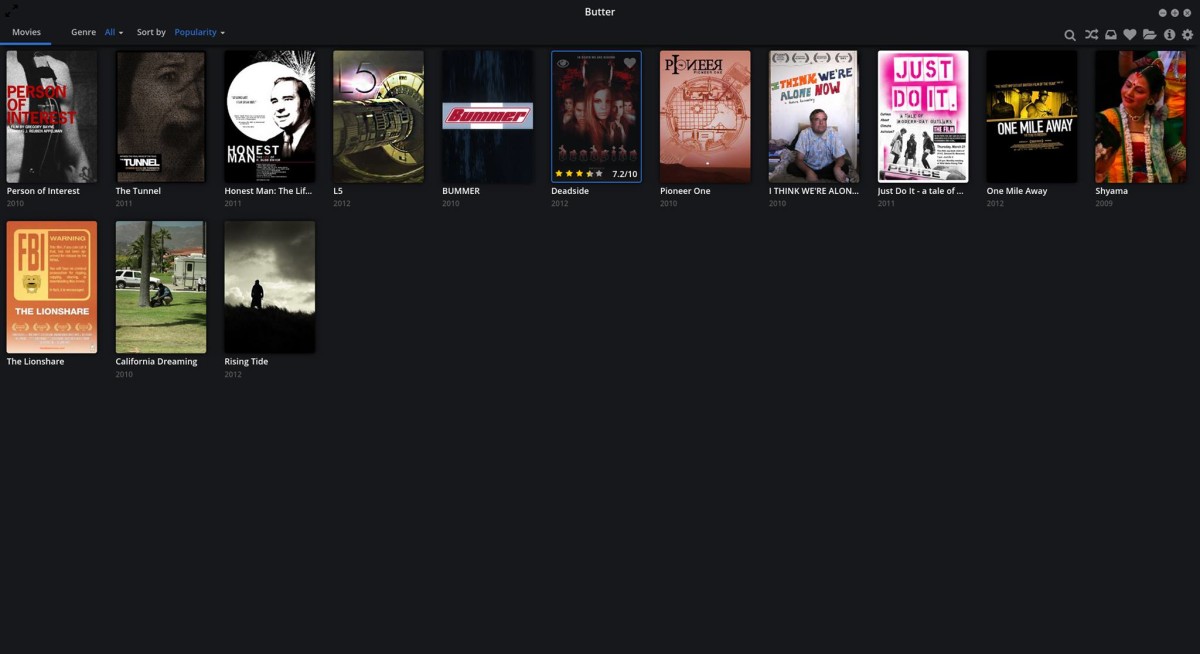 A new project from the creators of Popcorn Time has appeared amid legal turmoil for the service: Butter.

It’s a new version of the service “stripped down of the parts that made people wary.”

As in, it doesn’t directly facilitate copyright infringement — it’s just the core bits that make it possible to stream movies and shows from Bittorrent.

Butter includes all the bits you need to make a “great streaming service” but none of the direct links to piracy. To boil that down, they’re basically making it easy to spin your own Popcorn Time.

The team said that after it moved from GitHub over copyright concerns, it found people didn’t contribute as much. By separating out the streaming engine, it’s hoping that it’ll be able to get more developers onboard.

Butter was announced in a blog post on the Popcorn Time site, but it quickly went offline as the site is suffering an attack on its DNS.

The move is obviously to position Popcorn Time’s core technology as a legitimate service, while still allowing it to live on inside services that do provide copyrighted content.

You can grab the bits for Butter right now, though there are no pre-built binaries available.

The announcement post is offline right now, but here’s what we grabbed before it broke:

Making Popcorn Time has always been a big adventure and there have been confusions by developers and users alike about what could and couldn’t be done with the App.

Since we moved from github.com we’ve realized that made it much harder for new devs to contribute. We also understand that the particularities of the App could make some people cautious in sharing their skills with us, and boy do we love sharing !

It’s been almost a year that we have been having internal talks about how to mitigate this situation, a lot of ideas were thrown around. It has been a passionate and emotional debate but today we have decided to split the Popcorn Time project in 2:

This new project, hosted on GitHub, is basically your beloved Popcorn Time stipped down of the parts that made people wary. Butter is created so that anyone can contribute to great desktop and mobile apps that allows to stream movies and shows from Bittorrent (and other sources, but more on that later) in a stylish and easy way.

We hope to clear doubts in developers so that we can continue doing what we love: hacking a great experience for our users.

Butter will be able to leverage all of the traditional Open Source internet infrastructure: it will have its own webpage at https://butterproject.org[2] , its own twitter account @butterproject, its own facebook at https://fb.me/ButterProjectOrg[3] and its own G+ herehttps://plus.google.com/communities/111003619134556931561[4] . We are making sure butter is absolutely not using the popcorntime.io infrastructure to make a clear separation of concerns.

We’re making Butter like any Open Source project: open governance by the contributors and easy to fork. Planing on making a Popcorn Time clone ? don’t do it from scratch use some Butter to make it awesome !

Not only an empty shell, we want to make Butter a great App if you want to stream independent cinema and tv shows. Right now all the content in Butter is provided by the amazing people at vodo.net but if you know of any other sources of this kind of content please send us an email or better yet some code !

In a few days we should even have some binaries for you to try out !

What about Popcorn Time ?

Don’t worry, https://PopcornTime.io[5] will continue exactly as if nothing happened, it will still be Open Source, the code will still be hosted on our private Gitlab at https://git.popcorntime.io[6] and most importantly it will still have Pochoclin as a mascot and logo.

Only that now it will now be based on Butter, so it’s basically the same Popcorn Time you’ve learned to love but with this amazing new butter touch.

What about the mobile Apps ?

The Apps teams are working at this very moment to get you the experience you love in Butter format. As it’s a fair amount of work to clean them up, we could use some help ! have skills ? want to give a hand ? don’t hesitate in contacting us !

Over the next few days we’re going to finish porting all branches from the Popcorn Time git to the Butter repos on Github, you can give us a hand or sit back and relax as history is happening.

See you soon with more Buttered Popcorn Time for you folks !

Update: Both butterproject.org and popcorntime.io have gone down since writing this post — it’s not clear why, but the team’s Twitter account claims its DNS provider is under attack.