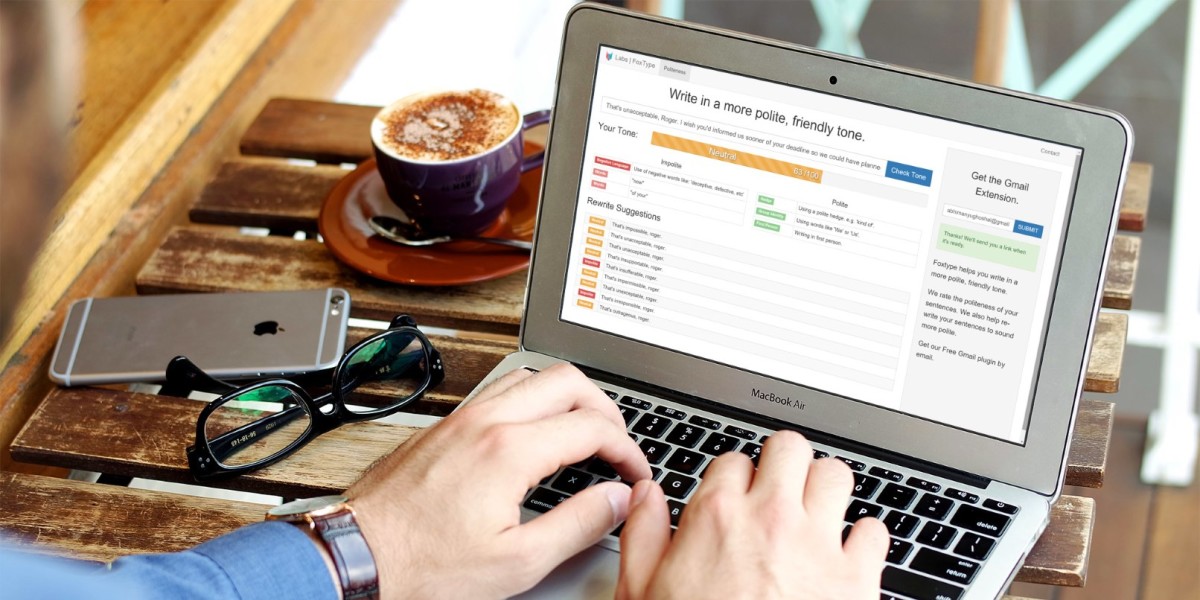 The trouble with communicating via text, whether it’s an SMS, IM or email, is that the tone of your message may not always come through as you expect. It’s especially difficult when you’re conversing with a business associate or someone you’ve never met before.

FoxType tries to help you write more polite messages by analyzing your textual input, assessing your tone and offering suggestions for improvement.

The next time you’re concerned about whether an email you’re about to send is polite enough, just paste it into FoxType and it’ll try to let you know if you’re being curt or courteous.

For example, saying, “That’s harsh, Roger,” in response to an email comes across as impolite with a tone score of 30/100. FoxType gave me a bunch of suggestions and I changed it to “That’s tough to deal with, Roger,” which returned a tone score of 71/100 (that counts as ‘polite’).

The app seems to learn from your input and offers numerous rewrite suggestions. Some are genuinely helpful, while others are useless — when I entered “It’ll be hard to ship next week,”, FoxType suggested “It’ll be a little difficult to post weekend.”

It also suggests kinds of words and phrases that you can avoid (such as negative words like: ‘deceptive and defective’) and others that you can incorporate into your message to make it sound more polite.

FoxType is far from being perfect; its assessments aren’t always accurate and its suggestions may not help much. Still, it’s a useful tool that should help you think about reviewing important emails before sending them along, particularly if you’re writing them when you’re stressed or upset.

It reminds me of Alex, an app designed to help stop you from publishing inconsiderate content — it looks for potentially offensive terms and suggests politically correct alternatives.

Our own Mic Wright noted that such apps are worrying as they encourage us to censor ourselves. But I believe that not everyone shares the same worldview and is equally aware of how sensitive some cultures are to words and actions.

If you’re writing for an audience you’re not familiar with or are dealing with subject matter that’s difficult to convey without potentially offending people when that’s not your intention, such tools can help you take a second glance at your messaging so it isn’t derailed by how you put it across. Both Alex and FoxType only make suggestions — it’s up to you to decide how you want to express yourself.

You can try FoxType’s app on the Web right now. The team is working on a browser extension that will work with your Gmail account to help review messages right in your inbox.

Read next: Autoplay will take you down a labyrinth of interesting Web videos