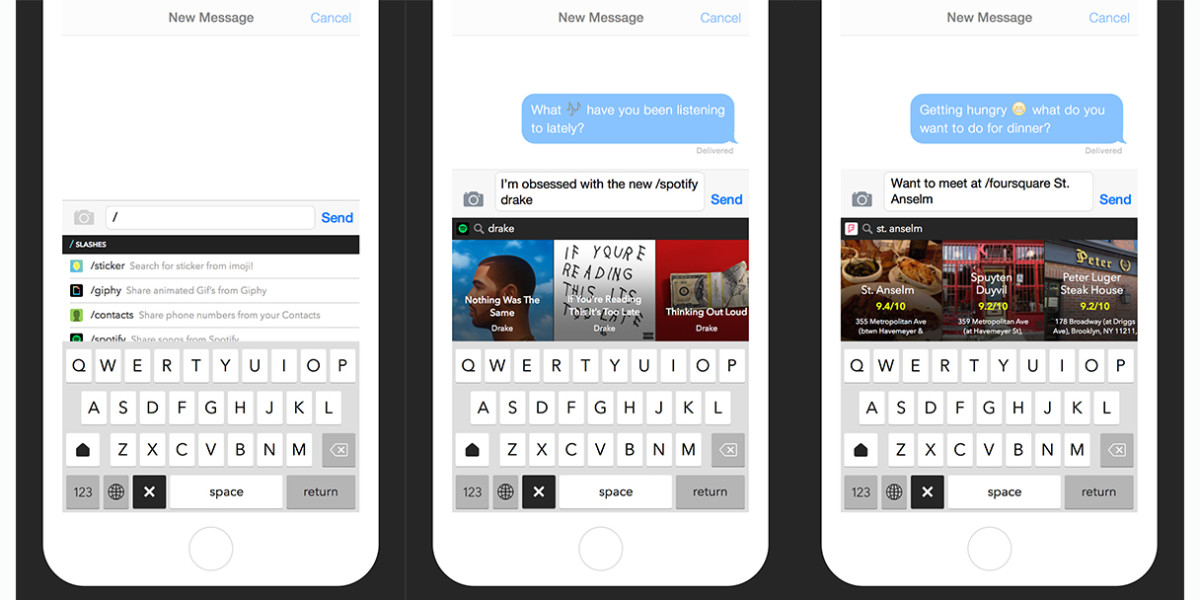 If you ever need information or advice about what to do or where to go while out an about, you might throw a query to Siri or Cortana. But they have nothing on Slash Keyboard, a new app for iOS that arrives today.

Slash is a free, intelligent helper that makes it easy to share links and other information without switching apps. Just tap the forward slash (/) on your keyboard to access partners like Foursquare, Stickers, YouTube, Contacts, Genius, Google Search and Maps and others. Slash is integrated with a total of 15 apps, including Giphy — its launch partner.

Slash is accessible the same way as other third-party keyboards, but its real function is to zero in on your query via its intention engine, which makes appropriate suggestions based on your conversation.

You could, for example, use Messages, email, WhatsApp, Twitter, Messenger, Instagram or Kik to say, “Want to go eat?” and Slash will tap into Foursquare to present your choices.

If you want to tell a friend where you are, Slash can register your current location. You can even search and send links from Spotify and SoundCloud without leaving the app.

The app’s intelligence is an advantage in that it reinforces existing behavior patterns rather than requiring new ones. Plus, Slash’s suggestions and auto-completes get stronger on repeated use.

Assistants like Siri work fine, but training yourself to voice query an automated being may not be suited to everyone’s taste. Slash offers the keyboard alternative with many — and a growing number — of services.

By the way, this also marks the first integration of Giphy for Keyboard, which worked closely with Slash to help make it fast and easy to use.

As the launch partner, Giphy’s integration is different than the others because Slash is using a Giphy product specially for its keyboard paradigm, and also powers the GIF database in Slash.

While Slash launches with a number of popular linked services, it’s not stopping there and intends to keep adding new ones over time to make the app even more useful. While it has launched first for iOS, an Android version is also in the works.