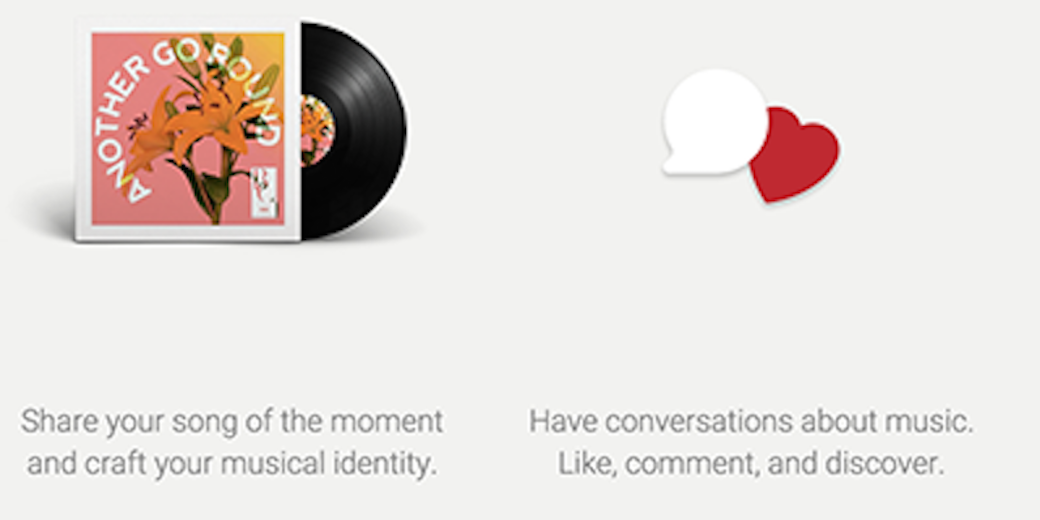 This Is My Jam’s announcement that it’s shutting up shop and turning itself into a permanent monument to all the great music that was shared on the service is not my jam. But thankfully, there’s a new track sharing social app that has recently become very much my new jam. It’s called Cymbal and if you love talking about music, you need to get on it.

The iOS app – Android is coming – hews to the same simple principle that This Is My Jam had: Share one song at a time that you currently like with a description of why you like it, follow other people and see what songs they’re sharing. You can share tracks from SoundCloud and Spotify. What makes it different is that it’s:

I spoke to Charlie Kaplan, who labors under the (faintly) ludicrous title of Head of Growth but who is basically the company’s hype man. He’s a former journalist for NPR Music and a long time friend of Cymbal’s founders Mario Gomez-Hall, Amadou Crookes and Gabe Jacobs.

The founding thing for Cymbal was a blog Gabe used to write ‘Lower Frequencies’. Each post was about one track and focused on what was amazing about that song. He had a couple of contributing writers and the idea was that within that one song would be microcosm of your life at that moment.

That’s what makes a song meaningful. It allows you to explain more about you than you can in words. He wrote that blog for a long time. It gave him an opportunity and lens to talk about incredible music coming out, but after a while he started to find it pretty lonely. He wanted to know what everyone else was listening to.

You know that scene from ‘Almost Famous’ where Zooey Deschanel’s character pulls all the records out from under her bed? He wanted to have more people guide him on a musical journey, to help him in musical exploration.

Inevitably, that impulse led to the idea of an app. It’s not a new one. Other players like Soundtracking have been trying to turn sharing your favorite songs into a habit (Rhapsody killed that one), while Hype Machine has built an enviable engine for consolidating the music blogs of the world. But Cymbal is a little different.

The guys behind Cymbal came together at Tufts College. Kaplan came into the picture through a fraternal connection:

I met Gabe through his big brother. Prior to Cymbal. I was at NPR Music and wrote about apps for the Webby Awards. Gabe worked on a couple of other projects before this – a geolocation app that didn’t work out, was one of them. At that time, his brother pointed him my way. When he started on Cymbal, I obviously had an even closer relationship with that. When they got their first funding, he said ‘Ok, let’s work together.’

Why does Kaplan do most of the talking for Cymbal? Simple – Gomez-Hall, Crookes, Jacobs are head down building most of the time:

Gabe and Amadou are the two developers and there’s so much to build. They get a little worried about making the product work. They want to focus in on making it really good.

The future of Cymbal is mapped out:

We have a strong vision for where we want to take this thing and how we want it to operate. We would really love it if discover was written into the experience of using the app. We want to make it easier to listen to and find songs. One part is us, one part is user feedback.

Obviously, one part of the puzzle is making Cymbal an appealing place for bands to live and share their work:

Since we launched, one thing has been bands reaching out about ways to promote their music. They don’t want to hook a personal Facebook page up to it. They want to connect their band page. We only realized that was a serious concern once they started reaching out to us.

That part does bum me out a little. The spread of Facebook login is obviously appealing to devs – it works well – but for people like my colleague Ben Woods who are not Facebook fans in general, the push to hook up with the social network in apps is an instant turn off.

What’s next for Cymbal? The one thing I was jonesing for – embeds – is definitely coming:

Embeds is one of the biggest things we’re dedicating design and development time too. We’re building out a Web player. It’ll bring Cymbal to a larger stage and it’ll be an effective tool for artists and labels. It’ll allow them to share easily to other social networks. Our Web player and new website will be game changers – I really believe that. They’ll extend the experience to everywhere.

I love the way Kaplan and his colleagues think of Cymbal:

The app is designed to make you feel like you’re walking into a record sore. I think that eventually, down the road, when we do ‘monetize’, we’ll try and orientate ourselves a way of helping record labels, artists and media organizations promote their work and learn more about how they’re performing.

Hoooooly shit! Just discovered @CymbalFM so I'm gonna need to leave work early & browse through music all wknd. This is all I've ever wanted

That’s always the secret sauce that can make these services fly. You get to share your tastes and discover new things to love, labels and ‘brands’ (urgh, nuke them from orbit) get the kind of data that traditional surveys and sampling just don’t generate.

Bang the drum, scream into the microphone, Cymbal is the app I’m digging most right now. I predict you will like it too.

Read next: Pause literally puts the music into music magazines

Read next: Our conference is changing: We’re inviting 20,000 people to a week-long festival