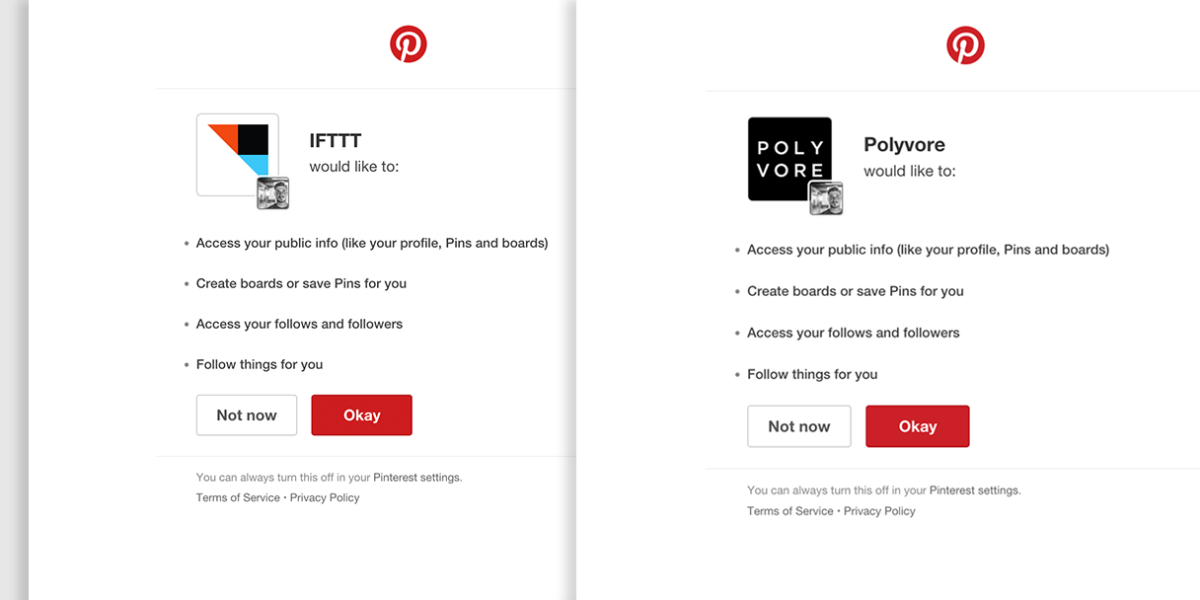 Pinterest has announced its first round of integrations — with IFTTT and Polyvore — built on its new Developers Platform.

Since launching the platform a few months ago, the network has worked with developers to take advantage of Pinterest APIs to help people do more with their pins. According to a new blog post today, you can now log in to other apps using your Pinterest account.

The Pinterest Channel on IFTTT, for example, lets pinners connect their account to hundreds of products and devices. You can automatically save pins to a board from actions in other apps  — from liking an Instagram photo, upvoting a Reddit post or favoriting an Etsy item. There are more than 20 recipes to choose from, now available on the desktop, iOS and Android.

Here’s a few you can use immediately: Logging into Polyvore via Pinterest lets you pin fashion, beauty and home decor items and collections while you create sets. It’s available on iOS and the desktop now and is coming soon to Android.

Pinterest’s research indicates that such integration boosts shares to Pinterest boards by 132 percent. However, there is flexibility. If you no longer want to use Pinterest to log in to these apps, you can always remove them via the Apps section in your Pinterest settings.

In addition, the new Developers site lets anyone view API documentation, with new SDKs available and documented. There’s also Pin It button functionality and support for JS and OAuth standards. The sign-up form is now available on the new site.

Pinterest says these moves are just the beginning, and that users and developers should look forward to more integrations and apps to launch in the near future.

Read next: Periscope for iOS can now block other users' messages in peace