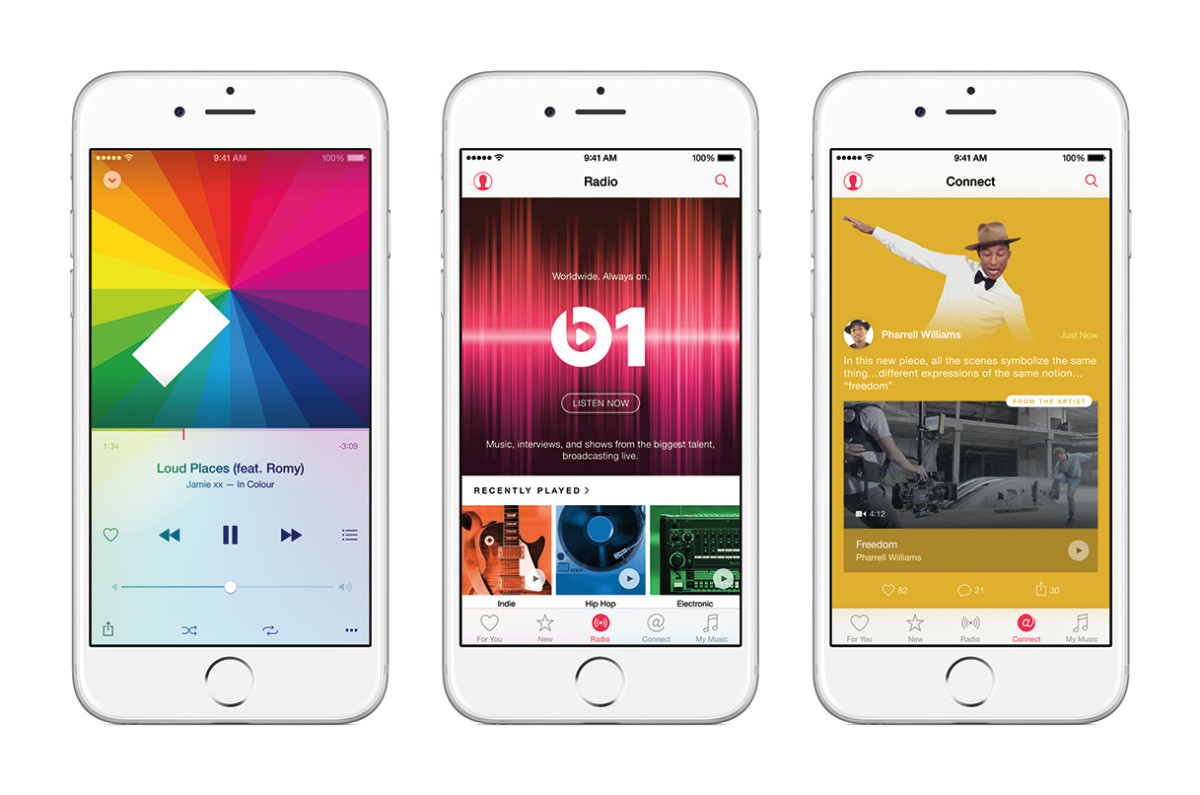 Apple is launching a new streaming music service tomorrow that will compete with some of your favorite online subscription services. Are you game? Here’s what you need to know before you jump in.

Look forward to a new Music app for iPhone and iPad, a new version of iTunes for Mac and Windows plus three new services: Apple Music streaming, Beats 1 radio and the Connect social network. Apple Music will launch as part of iOS 8.4 at 8 am Pacific time; Beats 1 radio launches one hour later.

The decision to try out the new service is a no-brainer. It’s free for three months, and if you don’t like it, you can bail. Here’s the lowdown.

What is Apple Music?

The service combines your own purchased music with Apple’s catalog of 30 million songs, letting you listen to specific artists, or check out personally curated music from the service’s music editors.

Instead of having to shell out $1.29 every time you want to purchase a new track, as part of your subscription, you get full access — just like with Spotify, Rdio, Google Play Music and other subscription services.

Curation is the key

Apple’s service will be curated by humans, not algorithms, and that will better help find the music you like to hear. The curation feature is derived from the Beats Music service, which Apple purchased in 2014 for $3 billion.

Does Apple Music include Internet radio?

Yes. Apple Music features Internet radio with real humans doing the curation. Unlike some other services, Apple is employing music editors to manage your acoustical experience.

Plus, its radio station, Beats 1 will broadcast live with DJ personalities like Zane Lowe from Los Angeles, Ebro Darden of Hot 97 in New York, and Julie Adenuga in London. Beats 1 will feature a combination of handpicked songs, celebrity interviews, pop culture news and other musical content. It will be commercial-free for now.

What else comes with the service?

The trial and the paid subscription give you unlimited skips for Apple Music radio stations. You can also like, comment, play, and save Connect material. You also get unlimited listening to the full Apple Music catalog while being able to add Apple Music songs to your library. There’s also offline listening and the ability to upload your purchased and ripped library to iCloud. Finally, you get access to Apple Music’s curated recommendations and playlists.

It consolidates your collection so that all your music is available in one place via your Apple ID. It hooks into your iTunes library, letting you to listen to any song on the go — even if it is not on to your device. And, you don’t have to download extra software.

Your iTunes playlists and the rest of your iTunes library will automatically be pulled into Apple Music at launch and iTunes is still available if you want to purchase individual music tracks, just as you always did. If you use Beats Music and switch your subscription to Apple Music, your playlists will also sync with the new service.

How much does this set me back?

There’s a free, three-month trial, and after that, prices are comparable to other subscription services, at $9.99 per month for all services. A family plan for $14.99 per month lets up to six family members enjoy the service via iCloud family sharing.

What if I don’t want to pay?

Even if you don’t pay, you will still be able to listen to the music you bought or ripped. If you pay $24.99 per year for iTunes Match, any music you uploaded to iCloud will be available. Apple Music and iTunes Match are independent but complementary, according to Apple.

Beats 1 radio will also be available and you’ll still be able to view and follow an artist’s Connect stream, and listen to Apple Music radio stations with ads (replacing the current iTunes Radio). But you’ll have to listen with limited song skips.

Yes. After you create the perfect playlist from your integrated collection of songs and music videos, you can save it for offline listening. Not only that — you can post your playlists, albums and videos to Facebook, Twitter or Messages.

Expanded cloud storage in the works

Senior vice president of Internet software and services Eddy Cue tweeted yesterday that Apple will allow users to upload 25,000 of their own songs to the company’s cloud storage service on June 30, and expand that to 100,000 songs with the arrival of iOS 9. This is similar to iTunes Match, which lets you upload 25,000 tracks to stream from iCloud — including songs you purchased independently of iTunes.

What about all the hubbub with Taylor Swift?

That has all been resolved amicably. Not only has Taylor Swift nudged Apple in the direction of paying artists during the trial period, she has agreed to allow her top selling 1989 album on the service. A number indie music companies also fell into line after the controversy ended.

Now, Apple will pay rights holders 0.2 cents per stream of their tracks during the three-month free trial period, and deals have already been struck with Merlin and Beggars Group — which represent the likes of The XX and Adele.

You can switch your Beats account over to Apple Music and it will transfer your saved library and starred playlists. After the move, your Beats subscription will be cancelled and you’ll be an Apple Music member, billed via your Apple ID. A Beats app update will migrate you to Apple Music.

How do I listen in?

Apple Music will be available tomorrow on the iPhone, iPad, iPod touch and Apple Watch, in addition to Macs and PCs. Android and Apple TV versions are scheduled to arrive in the fall. Just update your iOS device to iOS 8.4 and update your iTunes app on Mac or Windows and you’re good to go.

There’s plenty more to know about Apple Music, but we’ll just have to wait until it launches to find out!

Read next: Shazam will let you see all the embarrassing songs your favorite musicians are Shazaming