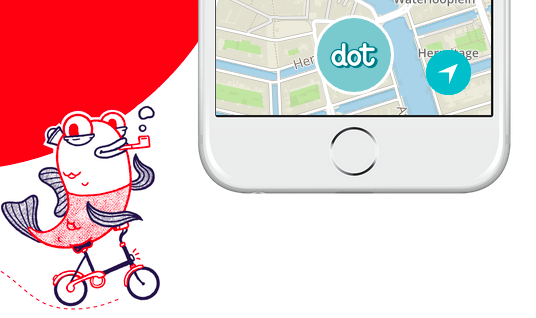 When you want to search for something, you more than likely go to Google and to check what your friends have been up to, you go to Facebook. Dot is a new iOS app that wants to bridge the gap between the two.

Dot works by letting you place a dot on any location you’ve visited on the map within the app and leave messages for other users and your friends to see. You can categorize your dots by adding hashtags, and dots from people you follow appear in different colors to distinguish them from your own.

What makes Dot different is how you can literally apply a dot to anything – its potential comes is in its simplicity. Dot founder Christian Verschaeren told TNW:

If, for some reason, you were to dot all of the art-deco fire hydrants you spot, the app will automatically create a unique map at yourusername/artdecofirehydrants showing just that.

This is similar to Google’s ‘Create a Map’ feature, but it’s much more straightforward as it does it automatically and still keeps your various other locations available at the same time, which the Dot founder says is important to maintain an element of serendipity.

Version 1.0 is only on iOS but the Dot team is already working on an Android version as well as the next update which will see improved integration with social networks, the ability to change the name of dots and upvoting for comments.

Read next: Emotes makes it easy to copy and paste complex emoji ಥ_ಥ

Read next: Darude is making memes a reality by playing TwitchCon 2015