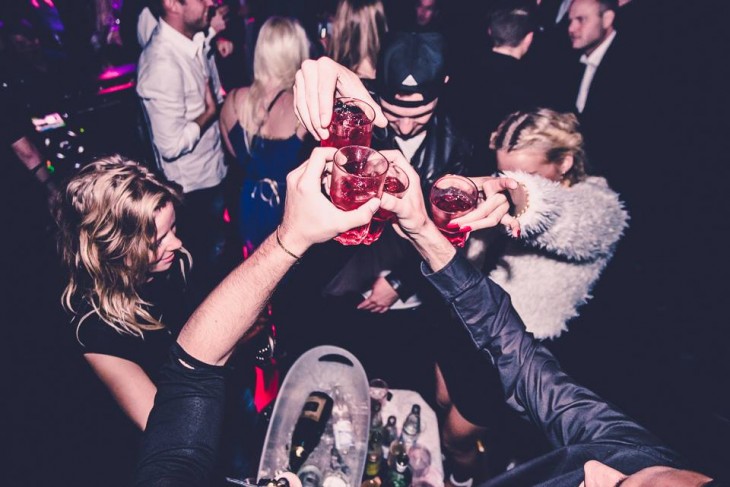 Beginning where a lot of great ideas arise – on the couch with friends – Heaps is an app that addresses how we socialize as groups.

Designed by five young Danish entrepreneurs, it is sort of like Tinder for friends – the app organizes groups of friends to match and meet up with other groups in the area.

So for example, if it’s Friday night cocktails, or you’re going to watch a match, you can check in on Heaps and discover other groups of friends in the area doing the same thing then connect and arrange that you all go together. Alternatively, it could be used to suss out the best after-party in your area as well.

It’s currently available for download on iOS and Android devices in Denmark, Sweden and the US.

Niels Hangaard, CEO and co-founder of Heaps told TNW how the idea for the app came about:

A year ago, we were five guys sitting in Kristoffer and Niels’ student apartment back in Denmark (both co-founders of Heaps today). We were having a dinner party on a Tuesday and we wanted to go out.

We realized that there was a group of girls partying on the opposite side of the street and we wanted to invite them over. We didn’t know how and ended up having a dull night out.

It was after that night the group of friends realized that parties at home are nearly always more fun than going out to clubs and bars.

“Its cheaper and you can actually talk to each other without having to approach people in an awkward dating kind of way,” explains Hangaard.

So, they decided to address the obstacle and created Heaps to let groups find, match and party with each other.

The app launched in August in Copenhagen and quickly gathered over 40,000 users in less than three months. On the back of that success, the five creators left Denmark in February for California, to bring Heaps to the US.

Heaps was released in the US last month at a party at the University of California. Almost 1,300 people showed up which resulted in over 2,000 downloads of the app after the attendees and their friends decided to give it a go.

It was a brave move to leave Denmark for LA so soon, but Hangaard says that Europe is still very much on their radar:

California is one area where we believe Heaps will work extremely well. Furthermore, if we get Heaps to work in the US it can be a great help when spreading Heaps across the rest of Europe.

Europe is still on the map of places we know we should and would love to cover. Denmark and Sweden are beautiful examples of how Heaps can work and gain traction fast within an area.

What makes it different to other meet-up apps like Tinder, Meetup or Grouper is that its primary focus has no romantic skew. Matching groups of friends is promoting social interaction and engagement in a way that dating apps don’t with one-on-one connections.

We have been lucky to succeed with a simple and easy experience – and it would not surprise me if more apps will launch soon. We are most likely not the first to work on this concept and probably not the last.

Of older apps, some have mentioned Grouper as a competitor in terms of concept. Their way of solving the meet up is however very different from Heaps’ – Heaps is free of charge and we emphasize the fun of browsing, matching and communicating with other groups.

Aside from the small team currently working on the app, the company is still bootstrapped and hasn’t taken on VC cash to date. Hangaard says that they are exploring the idea of fundraising to help speed up the expansion.

The focus for Heaps at the moment is on spreading the word and getting the app out there. This includes traveling to various universities to promote the app and get people socializing outside their own groups.

Their groundwork appears to be paying off. The company just entered into a deal with Universal Music to test how they can expand and offer people better opportunities to meet at unique events.

On top of that, VICE media has been following the Heaps marketing team from Denmark to Sweden and on to LA, documenting the ups and downs of creating a successful app for a short documentary due to be released in the next three months.

As interest grows, Hangaard says that he wants Heaps to become “the natural platform for you and your friends when you want to meet others.”

So, if you and your friends are making plans for the weekend, Heaps could be worth checking out.