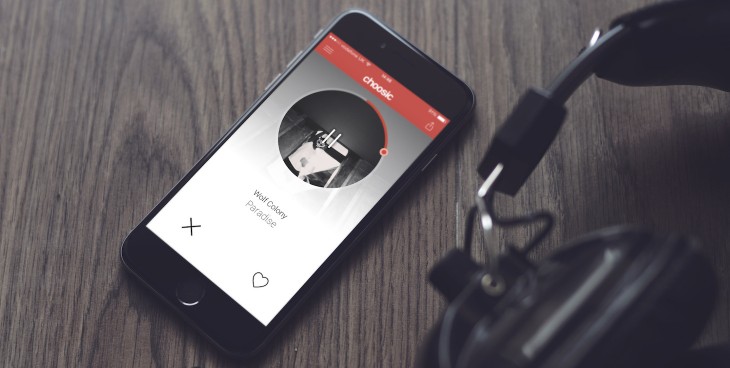 We’ve seen a lot of apps promising to bring Tinder’s swiping model to areas beyond dating/creepery. Choosic is the latest one to come our way and it’s applying the model to music discovery. 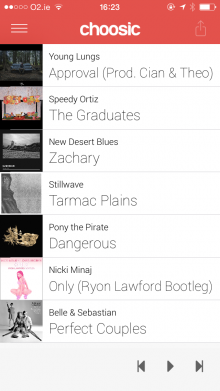 After you’ve chosen the genres that interest you, the app serves up an endless stream of songs. Swipe right for ones you like, swipe left to dismiss dirges that make your ears hurt. You’ll find a mix of lesser known acts and big names popping up.

The idea is that Choosic learns your tastes through all that swiping, getting better at offering up recommendations as it goes along. If it gets a decent number of users, it could offer a very compelling treasure trove of data for record companies.

If you let a song play to the end without swiping, playback stops, so you have to keep making choices in the ‘Discovery’ view. Luckily, the app does offer a way to just listen to the tracks you like.

The songs you dig are collated into a playlist that’s ordered according to when you discovered them in your queue. There’s no way of altering that at the moment or creating different playlists for genres or moods.

Choosic’s creators say they source the tracks from a list of 600 tastemakers – in a similar way to The Hype Machine music blog aggregator – then stream them from Soundcloud. It works well but may lead to some licensing headaches in the future.

Of course, you need an internet connection – there’s no way to cache your favorite tracks for offline – and I came across a few tracks that refused to play.

Like a lot of apps now, Choosic also demands that you sign up using Facebook, which will frustrate potential users who don’t jive with the big blue social network.

“We are planning to allow users to create custom playlists, and have the option to export those playlists to Spotify, iTunes etc as well as shareable playlists and recommendations. Our theory is that social validation on recommendations will be a big thing.”

“The way I see it, streaming is nailed. Now it’s about sorting all this content we have, and understanding listener preferences without forgetting the people who set trends and influence listeners.”

As long as it gets enough funding to survive, navigates record company politics and doesn’t get the plug pulled on it by Soundcloud, Choosic could do very well. Tinder’s swipe model is just as addictive with music as it is with objectifying humans.