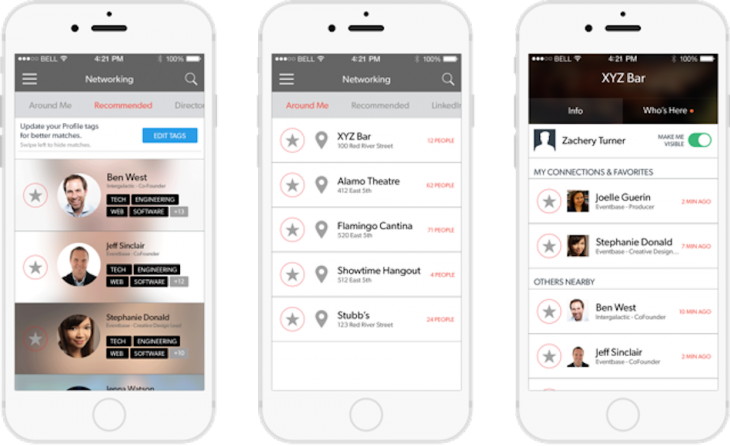 Austin’s annual jamboree of film, music and startup culture, SXSW kicks off in 10 days and the festival has just launched its official app, which relies heavily on Apple’s iBeacon technology.

SXSW Go (available on iOS and Android) will hook into over 1,000 beacons placed around the event’s official venues with an opt-in feature called Around Me.

When an attendee checks in with the app, the beacons will let them know what’s happening nearby and who else has arrived recently. The idea is make to networking at the massive event that little bit easier.

The SXSW Go app was developed by Eventbase, which became the first company to receive direct investment from the festival organizers last year. It collaborated on the project with geofencing experts Gimbal (who supplied the beacons), high-density Wi-Fi company RightRound and mobile marketing outfit Urban Airship.

The app also features attendee matching to hook up like-minded visitors, the ability to connect to Facebook to find friends who are attending, and Session Live – which also uses the iBeacon deployment to show who else is at sessions and let you have discussions with them.

There’s also the usual features you’d expect like videos and tracks from artists performing at the festival, a visual guide to the line up of speakers, performers and events, and maps to help you get around.

If, like me, you’re not going to SXSW, you can still use the app to watch videos from the event and generally stoke up your jealousy.

Read next: Tradiio Turns Recommending New Music Into A Game