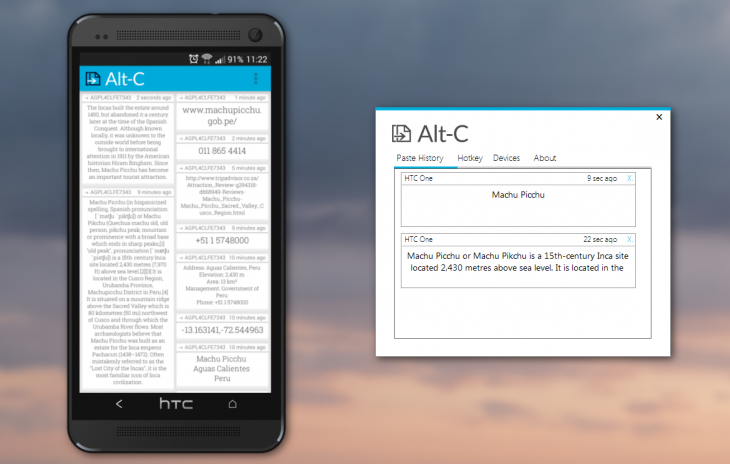 Single-purpose devices might have started dying a long time ago – digital cameras and dictaphones certainly don’t sell in quite the same numbers now as before smartphones came along, for example – but single-purpose apps have been increasingly popular since the noisy launch of Yo last year.

Alt-C is another such one-trick pony, though it has a far more utilitarian purpose than sending a random Yo to your friends: it lets you copy text and links back and forth between your Android phone and Windows PC. It’s a lot like PushBullet’s universal copy and paste function, without all the other frills PushBullet offers. It’s also a manual process, rather than copying all links between devices.

To use it is easy, just install the desktop and Android apps (Mac and iOS are on the way) and then link your two devices using the code displayed on your device’s screen. Unlike other similar apps, there’s no need to create an account here, which is a major plus to me.

To copy text from your computer to your phone, just highlight it and then press your hotkey combo – alt+c by default. The copied text then appears in your list on your Android device.

To copy from your Android device to your computer, just copy the text as normal and then hit alt+v and it will show up in the list on your computer.

Both devices keep a synced list of copied text, so you can always retrieve info you’ve transferred previously easily, up to a maximum of 50 entries.

The only potential downside is if you find yourself away from your PC but wanting to send more than one bit of text to it, as it only sends the last thing you copied.

It’s a simple app, and it does just one thing, but that’s pretty damn handy if all you need is to copy text between the devices in front of you.