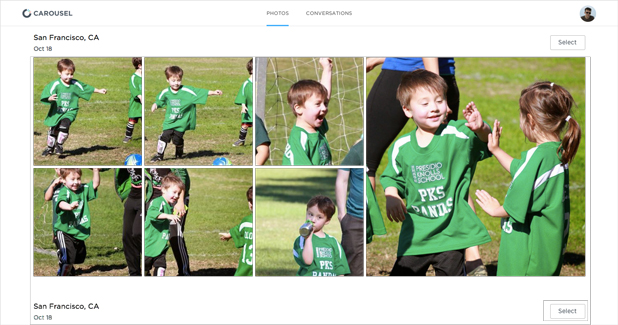 Dropbox Carousel, the photo gallery app launched for iOS and Android smartphones last spring, is now available for the iPad and the Web. A version for Android tablets will be released in two weeks, the company said.

The tablet app is scaled and designed for larger mobile screens and works in much the same way as the mobile phone apps.

All photos viewed in Carousel actually reside in Dropbox, but the app is designed to work quickly so that accessing and sharing photos in Carousel is indistinguishable from photos stored on your local device.

iPad grid view with movable timeline that quickly moves you through thousands of photos.

In addition, Dropbox has tweaked the design of Carousel phone apps to make them easier to use and nicer to look at. The new version improves the grid view, the lightbox and the conversations interface.

“The old grid view had a lot of white space in between photos and events that wasn’t very aesthetically pleasing, so we created this new grid view that fills up all the white space by making some of your photos larger than others,” Chris Lee, Carousel product manager, told TNW. “We particularly focus on the photos of people and make them extra big.”

In both phone and tablet versions, the newly designed lightbox lets you double tap to zoom, the delete button is more conveniently located and sharing is easier because all photos are already in Dropbox, so you can just tap and start a conversation. Unlike the smartphone versions, the iPad app has a landscape mode for for all functions of the app.

You can also now share photos with people who do not have Carousel, though they cannot share back with you unless they have the app.

In other news, Carousel on the iPhone is now integrated with Instagram and WhatsApp, the most popular photo posting platforms. While that functionality has been available for the last few weeks for Android phones, it is now available for iOS

Said Lee, “Right now there isn’t a single place to bring all of your images together to make sure that they are safe, organized and super easy to share with the people you care about. We want to build a home for your most important memories.”

Read next: Facebook expands its drone team to bring the internet to everyone