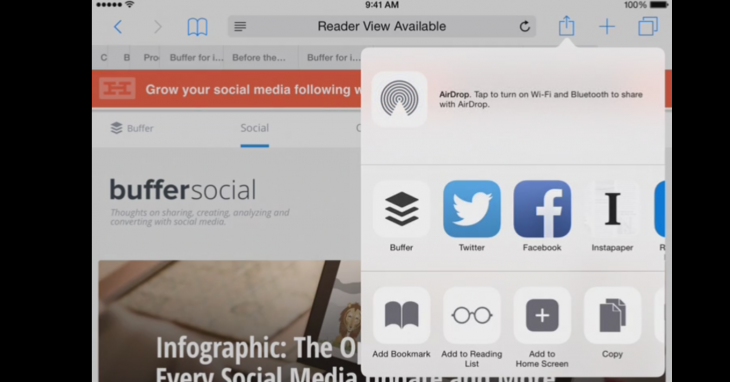 Social scheduling tool Buffer has today updated its iOS app with new tools to make sharing easier across social networks, as well as an optimized version for iPads.

The company said that among the headline new features is the ability to manage your entire Buffer dashboard while on-the-go and new sharing features baked into the app, thanks to new functionality added by iOS 8. For example, you can now share to your Buffer queue directly from Safari, Chrome or any other app that supports native iOS sharing.

Also new is the ability to native retweet via Buffer, through other apps. “Let’s say you’re browsing your Tweetbot app for the latest news. You spot a tweet you’d love to share. Now you can share this tweet as a retweet and add the retweet into your Buffer queue—all without ever leaving the original Tweetbot app,” the company explained.

As well as releasing an iPad-friendly version of Buffer, the new iOS app has been optimized for Apple’s iPhone 6 and 6 Plus.

Read next: Android Wear gets its first big update with offline music syncing and GPS