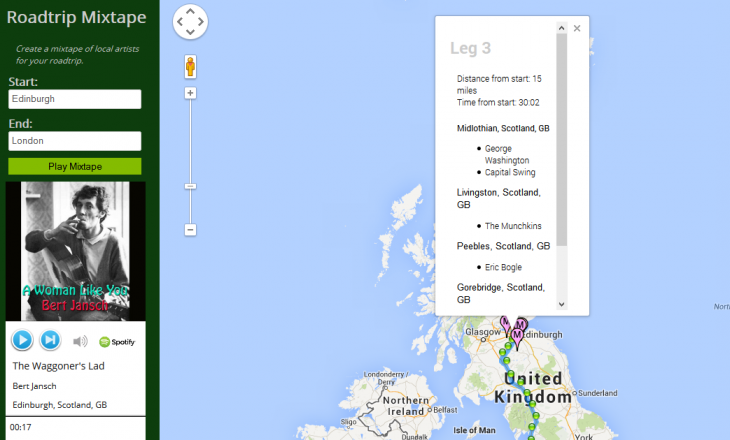 Just this week Spotify revealed it was expanding its Web API, with data from its recent acquisition of The Echo Nest taking a leading role. With that in mind, an interesting little nugget has come to fruition courtesy of music technologist Paul Lamere and the tight-integration between the aforementioned companies. With a little bit of Google Maps thrown in for good measure.

Roadtrip Mixtape is a Web app for, well, roadtrips. You enter a starting point, finishing point and hit ‘Play Mixtape’. It’ll then play artists who hail from the places throughout the various legs of your journey, and you can click on the map to see the playlists too.

While it works on the mobile Web too, Roadtrip Mixtape only plays 30-second snippets from each track, so this in itself won’t serve you all that well as a standalone app on the road. But it can, of course, be used to inform your own playlists within Spotify itself, and if nothing else it demonstrates what’s possible through mashing data together – this could be built out into a fully-fledged app for cross-country highway frolics.

Read next: The BBC creates a 360-degree virtual reality news bulletin. All you need is a $350 Oculus Rift to see it.