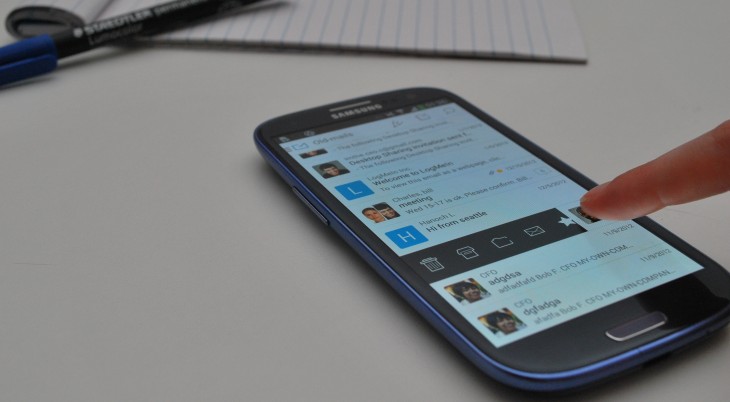 From Mailbox and SolMail to Evomail and beyond, Google Play has its fair share of email clients. But that isn’t stopping MailWise from throwing its hat into the proverbial ring.

Following an extended open beta period, Israel-based Syntomo has now officially launched MailWise to the masses, promising “an innovative approach to tackling the complex and disorganized experience of emailing via the mobile phone.” Sounds ace.

We’ve given it a bit of a spin, and it’s definitely nicely designed and could easily become your default all-encompassing email client, though we’re not convinced it brings that much innovation to the table beyond what’s already available in similar apps.

MailWise covers a lot of ground in terms of the accounts it supports, including Gmail and Exchange, which gives it a lead over other apps such as MailBox which only caters for Gmail and iCloud accounts.

Setting up is simple and painless, and you can stipulate check-frequency and syncing options.

In a nutshell, MailWise’s main selling point is that it enables ‘clean’ conversations – it strips out repetitive information such as signatures and headers within a thread, but only once you click the ‘Enhanced’ view button you’re presented with.

If you do, you’ll note it contains just the information in simple, readable text. Also, repetitive notifications can be grouped, so that birthday alerts, newsletters and so on are bundled together. You can also select how many days you wish to sync, as you can see here in Outlook.

“After conducting vast research in the field we developed an algorithmic engine that merges all emails from the same conversation together by correlating content and meta-data,” explains Shai Geva, CEO and founder of MailWise. “It also parses individual emails and understands their structure, allowing even forwarded emails to be displayed in the same succinct and beautiful view.”

If you’ve used any modern email client on Android, you’ll be familiar with the navigation actions – swipe left to archive, while swiping right gives you more options, including delete, add-to-folder, favorite and – hooray – ‘Mark as Unread’.

Sliding in from the left, you can access your various accounts and folders, while digging in to the nuts-and-bolts of the settings you can tweak facets such as whether to group update-emails together or not, or make ‘Reply All’ the default for all responses.

MailWise is certainly beautifully designed and during its beta phase has found a fair few fans already. Now that it’s officially ‘out there’, the clutter-free conversations it enables should garner even more users from across the Android realm. Though whether this on its own will be enough to tempt people over from the myriad of existing email clients remains to be seen.

Read next: What hackathons are REALLY about