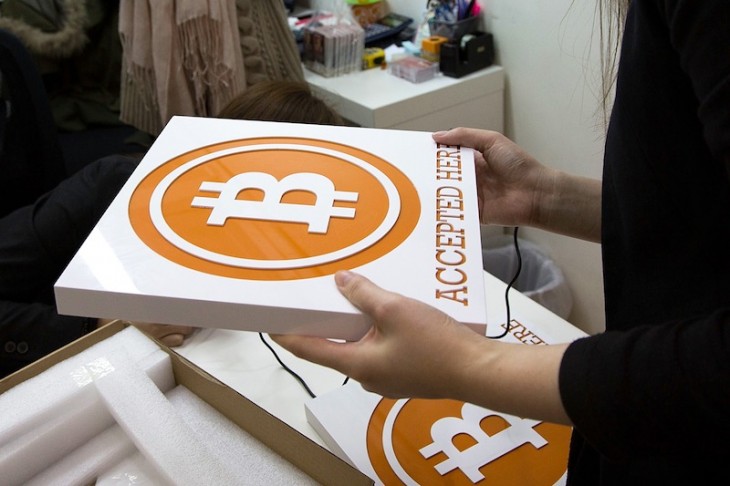 Bitcoin and crypto currencies in general are difficult to explain. Bitcoin wallet app QuickCoin doesn’t get into the weeds about block chains, Hashcash and mining. Instead of trying to explain the back-end details of the currency it does one thing, it lets you send money quickly and easily. 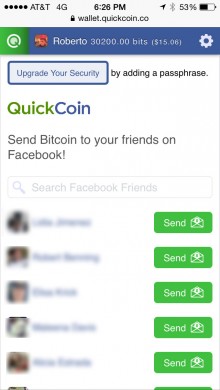 The QuickCoin app uses Facebook Login and lets users send Bitcoins quickly and painlessly to friends and family. The service is currently in open beta. It’s browser-based and so far there are no plans for a native Android or iOS app.  CEO Nathan Lands says the goal is to make an app for regular people. You just sign in, choose a friend and send them a message with the amount of Bitcoin you owe them.

To ease the pain of sending digital cash, there’s an option to send dollar amounts instead of Bitcoins. It’s like Venmo, but with a currency that’s not tied to a nation.

Currently Bitcoin and everything associated with the crypto-currency has been embraced by hackers and early adopters. Ask the average person how to trade or mine Bitcoin and you’re likely to be met with a blank stare. Add in the volatility of the exchange rate to dollars (it’s currently at the $500 mark after hitting $1,000 in November last year), and the crypto-currency has had a difficult time breaking out of its shadowy, hacker reputation.

But, Lands believes that if you remove the pain points of Bitcoin by letting anyone with a Facebook account trade and pay via the QuickCoin wallet, the currency will begin to be more widely used. Whether you’ll see Bitcoin prices on goods in more than a few stores has yet to be seen. 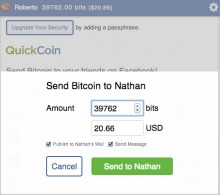 The CEO admits that there’s a problem paying for goods with the cyber currency. “That’s another thing we’re trying to solve, but that’s down the road,” says Lands.

Without a real ecosystem Bitcoin may just languish in the world of hackers, early adopters and speculators. For the average person, what’s the point of a currency you can’t spend? Easy-to-use wallets like QuickCoin are a good first step, but at the end of the day, if you can’t buy groceries with your Bitcoin, the average person isn’t going to care how easy it is to send to friends.