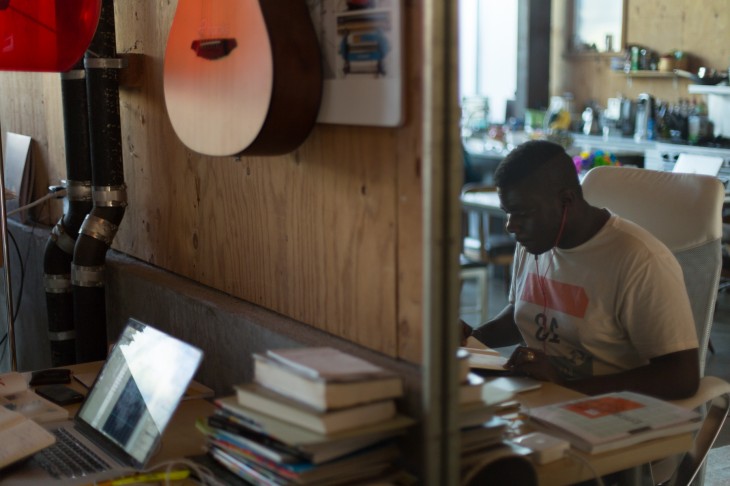 The music wars are at a fever pitch, with Spotify, Google, Rdio, Pandora and the other big players in a full out war to win over users to their streaming services. But, one little talked about US company is quickly gaining momentum by pursuing an angle that none of the other platforms have managed to nail yet; curation.

8tracks, a San Francisco based company that’s been operating since 2008, is doing exactly that. Today, the company is launching a major update to its iOS application as it ramps up efforts to get more mindshare and users onto its platform.

The update focuses on helping get users to the music they feel like listening to right now, by offering them a range of choices that add up to the ‘path of least resistance’ to finding music they like.

The Next Web talked with David Porter, CEO and Founder of 8tracks on a sunny Spring afternoon. He told us that the focus is on quickly showing you music that you like and music that you’ve listened to previously, since it’s likely you’ll want to find those playlists in a cinch.

This updated version of the app shows a music timeline at the top which ‘drops the needle’ from where the listener left off. This allows the user to scroll backwards in time to see what they were listening to from the mobile app or website previously, or to scroll to the right to see playlists that are next in the set they’re listening to.

The entire home screen of the app is dynamic and changes as the user’s tastes change, learning from the tags and areas that users visit most on the service and surfacing them for quick access in a list view. It’s subtle enough that it isn’t confusing — I didn’t even know it did this until David pointed it out — but it’s entirely intuitive and gets you listening to music fast.

This feature is extremely powerful and throughout my use of the app during the beta period I found it helped with the ‘cognitive overload’ that one often experiences with music streaming services; sometimes with Spotify or Rdio there can so much to choose from that you’re unable to make a decision.

To further help with this, the new ‘explore’ screen offers a combination of music types and moods to search by with a clear visual differentiation between the two, which when combined are a powerful tool for finding the perfect playlist.

In my testing over the last few months of the new 8tracks app, this alone has lead me to use the app time and time again over Spotify as I was able to find something new that suited my mood in seconds, as opposed to actually needing to know what I wanted to listen to.

When looking at the numbers, it’s easy to see why 8tracks has put its focus into building a great mobile experience. In March alone, 14 Million hours were streamed on the service to iOS devices, with 13 Million hours on the website itself and Android trailed behind with only 4 Million hours. That’s why 8tracks picked iOS to get the overhaul first. Android will get the update in a few months time too.

I’m a long time user of 8tracks, so the new app instantly appealed to me, but I wondered how 8tracks planned to win people over. I asked David; if there are so many options out there, why would people choose 8tracks over, say, Pandora?

David eagerly pointed out that with services like Pandora the music it chooses is generated by an algorithm, which isn’t bad but will always lose out to curation which offers better and deeper results. Even better, he showed me a Twitter search that reveals many users actually hate Pandora.

He continued, pointing out that because 8tracks is entirely user-generated content, the listener is able to find a ‘DJ’ that they like and follow their playlists/tastes by curating a bunch of different sources and styles of music from various DJ’s. This generally results in better quality mixes and less frustration for those using the service.

What may surprise many is the size of 8tracks’ user base. A recent comScore survey showed that among the 18-34 year old demographic, 8tracks has 1.7M unique monthly users, which means the service is now as big as Last.fm’s streaming service and is over double the size of Rdio (with only 738,000 unique viewers), but there’s still a way to go.

The comScore  graph above illustrates that the company still has an uphill battle to catch its largest rival. Despite 8tracks winning over what seems like a large number of users, Pandora has an incredible 42 Million monthly unique visitors. David pointed out that 8tracks is obviously not going to win all of those users, but 8tracks is clearly preferred by many, especially those with taste in music that want to listen to playlists created by like-minded people.

He also pointed out that 8tracks has been entirely profitable since 2012 (having only raised $1.5M previously) and has a lean staff of just 16 full-time employees running the entire site out of a beautiful loft office in San Francisco.

As the company seeks further growth amongst a market crowded with online music streaming services, it’s planning to focus its efforts on building great mobile experiences and pushing for more partnerships with companies to help drive users to the site.

These partnerships could be in the form of integrations, like 8tracks has with hardware like it has with Sonos or through sponsored playlists by companies like Victoria’s Secret on the site.

8tracks also hopes to promote this growth through its community, with its recently opened forum where users can discuss mixes and share ideas about music. The company also recently hired a community manager to help manage this as well as to help the company become more prominent online.

There’s plenty of ground for 8tracks to cover to catch up with the bigger players, but with a solid service, full profitability and a great new iOS app, the team is poised for growth in 2014 and is serious about getting its name out there more than ever before.

Check out David Porter’s favorite 8tracks playlists to get you started if you’ve never tried the service before:
Picnic
BERLIN

Read next: Nintendo is making a new console for emerging markets, but there are huge challenges involved