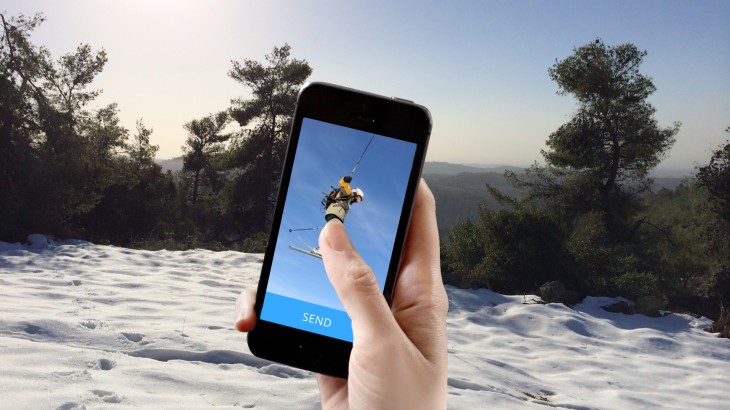 One of the co-founders of news reader my6sense launched his latest startup today. Called Samba, it’s a video messaging app similar to Snapchat, but without the ephemeral aspect. The added twist? It literally records the viewer’s reaction and broadcasts it back to the sender. Each video can be up to 15 seconds in length and is intended to help people enjoy their relationships with friends and family.

Founded by Barak Hachamov, formerly the chairman of my6sense, Shay Erlichmen, Ronel Mor, and Oren Meiri, Samba hopes that users will be creative and engaged with its app while also giving them complete control over their content.

Once Samba is installed, users record a short video message using a camera on their mobile device before flicking the screen to send it to a friend in their address book. Once the recipient receives the video message, Samba gets to work and automatically records their reaction via the phone’s front-facing camera, sending it back to the other person.

When recording a video, the experience is akin to Twitter’s Vine app, except you have more time. Samba does provide filters, stickers or other accessories, though it does let those receiving videos to fast-forward and rewind them.

It’s important to note that Samba doesn’t allow for multiple videos to a single person. You’d have to create multiple videos each time you communicate with someone, which some may consider to be tedious and not user-friendly.

“Samba offers a new experience that mimics human behavior and kicks it up a notch. No emoticon can ever compete with a true human expression. With Samba, every message gets the response it deserves,” says Hachamov.

One of the appealing features of Samba is that you don’t need to have the app installed in order to view videos created through the app. This works great especially since Samba is only available for iOS. Non-app users can still receive videos via SMS, but won’t be able to provide reactionary videos.

More is certainly planned for Samba. Hachamov tells us that group and multiple contact communication features will be added in the future. In addition, we’re told that device syncing and file exporting is also planned, as well as premium features, which is one of the main ways that the company will monetize its service.

Hachamov and his team believe that a service like Samba is needed because none of the apps today are focused on video messaging, including WhatsApp, Snapchat, and Vine. The company believes that while they create “amazing services to allow younger audiences to do crazy stuff”, what’s missing is the ability to have more meaningful interactions — something that Samba can provide.

To emphasize its point about users having full control over their content, Samba allows them to and automatically remove them from a recipient’s device. What’s more, reaction videos can also be deleted.