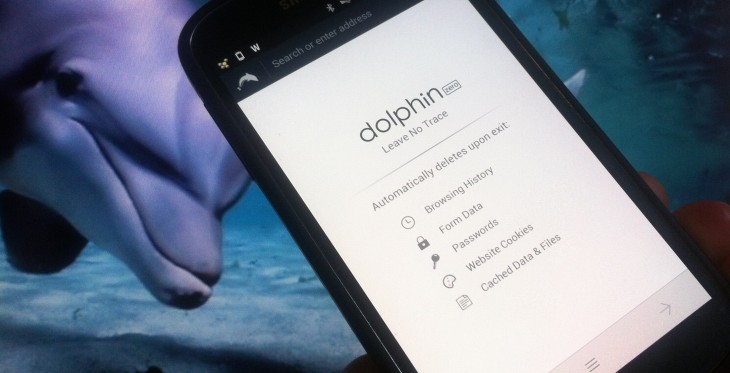 If you’re reading this on your mobile, chances are you’re using Safari, Android’s stock browser, Chrome, or perhaps even Opera Mini. That’s according to recent stats from NetMarketShare, at least.

But there are other browsers out there too, such as Dolphin, which has won awards, plaudits and top-ratings for its iPhone, iPad and Android app over the past few years, notching up 80 million installations en-route. And today, MoboTap – the company behind Dolphin – is unveiling a brand new browser that promises privacy as a core underlying tenet. It’s Android-only for now though.

Clearly seeking to tap the ephemeral trend, MoboTap is touting Dolphin Zero as the ‘Snapchat for browsing’, as it automatically deletes all your data including browsing history, cache, passwords and cookies.

When you first launch the app, you’re left with no doubt as to Dolphin’s core raison d’être – its strapline ‘Leave No Trace’ heads up a list of things that it automatically deletes when you tell it to.

Also, you may remember back in September we reported that Dolphin was partnering with a slew of search engines around the world including Baidu, Yandex, Yahoo Japan and DuckDuckGo. The latter of these is a privacy-focused engine, so it makes sense that DuckDuckGo is the default engine here.

That said, you can of course use Google Search if you wish, and also access all the usual services you would normally access from your phone, including Gmail, YouTube, Google+ and all the rest.

Dolphin Zero is basically a stripped-down version of the standard Dolphin browser – you can’t build a library of bookmarks for example. And although any passwords you’ve entered remain if you simply close the browser to peruse other apps on your device, if you physically hit the ‘Exit’ button, a metaphorical shredder will pop up and tell you that everything in the previous session has been destroyed.

Dolphin basically promises that it will never “collect, store or share” any information, including form data, browser history, passwords, cached data and files, favicons, input data, cookies and location information. And as with other browsers, it supports Do Not Track, though this is always on by default here – in Chrome and Firefox you have to opt in to this.

So how much of a void does Dolphin Zero actually fill? If you’re paranoid about your data and are looking for a simple, no-nonsense browser that deletes everything, then it’s worth checking out. But it does feel a little like it’s jumping on the post-NSA-security-fears bandwagon, by offering something that largely exists already in the private browsing modes of Chrome or Firefox.

That all said, tech titans such as Google aren’t exactly flavor of the month from a data-privacy perspective, so perhaps something like this that specifically tackles the issue will go down well. And given it’s such a stripped-down, basic browser it’s actually speedy too.

“With Web security being such a salient issue right now, people are feeling less and less confident that companies are respecting user privacy,” explains Dolphin’s VP Edith Yeung. “Even though it’s impossible to go completely untracked on the mobile Web, we have done everything to make a new product that goes beyond anything that you will find in the market right now.”

Dolphin Zero is available to download now from Google Play, and a version for iOS will be arriving at some point, though no details yet on when this will happen.