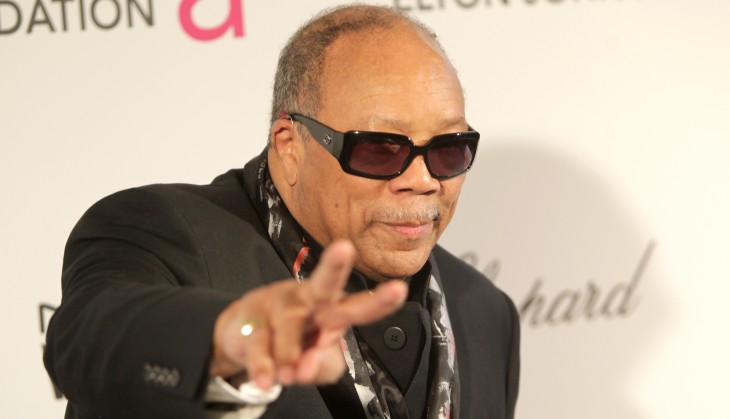 Quincy Jones, the music legend who produced Michael Jackson’s Thriller album and has the record for the most Grammy Award nominations, is one of the creators of Playground Sessions, a startup that’s reinventing the traditional piano lesson with an app that gamifies the experience and provides instant feedback as you play.

After an illustrious career spanning roughly six decades, the 80-year-old Jones helped start Playground Sessions because he sees a need for better music education in the US.

“I’ve been waiting a long time for something like Playground Sessions to come along,” Jones said at an event yesterday to celebrate his induction into the Rock and Hall of Fame, which takes place officially tonight. “It’s the ultimate technology to bring music to people of all ages who have the passion to learn it.”

Jones calls the software, which works for PCs and Macs, “a musical Rosetta Stone”, referring to the popular language learning software. “It would have been great,” he said. “It would have saved a lot of time. We had to do it the hard way.”

While it might seem counter-intuitive for an 80-year-old to be involved in a software startup, Jones said that he’s been integrating tech and music throughout his career.

“We were the guinea pigs for all the synthesizers. I used the very first one in Ironside,” he recalled. “We were the first ones with the Fender bass…Without the Fender bass in 1953, connected to the electric guitar, which came out in 1939, there would be no rock and roll and no Motown. It would have changed everything.”

He continued: “I know this young guy who said, “Us young guys are going to have to teach the old guys technology,” and I said, “Naw, I’ll teach your ass.” I was in Silicon Valley 48 years ago. I literally thought that the information age and computers, they were smoking kool-aid, man. [Object-oriented programming pioneer] Alan Kay was my teacher back then.”

It’d be easy for Jones to rest on his laurels, but he said he’s just getting going:

“I think I’m just starting, man. All over again. I’ve done all that other stuff. Got the biggest record ever sold in the history of music. I’m not into all that, you know, I just do what makes me feel good and I’m happy, and make somebody else feel good.”

Playground Sessions combines a music store for sheet music, video lessons and a MIDI keyboard setup into a robust system for learning to play through popular music. The main pricing scheme is a subscription method, which costs $9.99 a month if paid for a year or $14.99 if paid quarterly. Membership includes the startup’s “bootcamp curriculum” with lessons on basic keyboard skills, notation, ear training and rhythm. It also offers discounts on video tutorials and sheet music.

Non-members can try out the program and purchase lessons and songs a la carte, but they won’t have access to some of the gamified features, such as scoring, social sharing, badging and leaderboards.

Lessons are taught by David Sides, a YouTuber known for his arrangements of popular songs like OneRepublic’s Apologize.

I would love to have had a tool like this when I was a kid. Piano lessons were a requirement in my family when I was growing up, but I quickly learned an odd dichotomy between the contemporary music I enjoyed listening to and the classical musical education that I was receiving.

The new learning method comes as a response to the Guitar Hero/Rock Band craze that swept the world a few years ago. While that trend has largely died down, the fact remains that many of us would have some serious chops if we’d spent all that time learning to play instruments instead of plastic controllers. The Playground Sessions team believes it can combine the fun of a music rhythm game with a proven curriculum in order to make learning fun.

Playground Sessions seems perfectly tailored for the YouTube generation. The video site has been a huge platform for young people to share music and even learn. And let’s not forget that Justin Bieber was discovered on YouTube.

Founder and CEO Chris Vance said he believes the software is “deep enough to be a launching pad,” even for beginners. During the beta phase of the product, the startup held a contest to have a fan spend 30 days going from absolute beginner to intermediate level with Playground Sessions and then hold a concert. The winner eventually went on to make it to Hollywood on American Idol.

Vance noted that the company is interested in using “new media to drive the goals of our product”, while also pointing out the difference between Playground Sessions and lessons just uploaded to YouTube – qualifications and instant feedback.

Jones highlighted that the piano is a great instrument to start learning on. “It’s what the symphony orchestra’s based on…Everything’s easier after piano,” he said.

Down the road, the startup may be interested in expanding to other instruments like guitar and drums, but it’s focusing on the piano for now. The instant feedback features will take some tweaking in order to work with an electric guitar, but the technology’s certainly there.

For me and many others, learning music in our childhood wasn’t fun. Playground Sessions deserves a standing ovation for using technology to change the game.