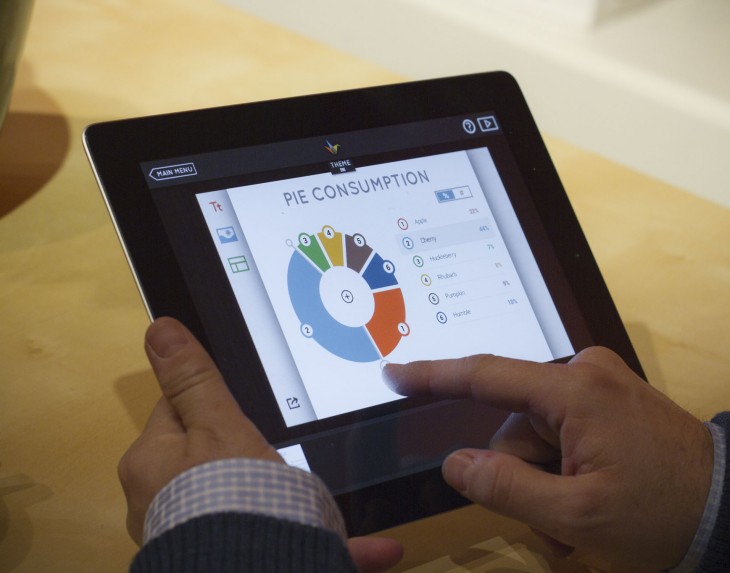 Haiku Deck is launching a new version of its iPad-based presentation app, the Seattle-based company announced today. New features include the ability to easily add pie and bar charts, insert bulleted and numbered lists, and edit the images you have uploaded.

While the app already gathered very positive reviews when it was first released last August, its new features are welcome additions to its value proposition: make it dead-easy to create beautiful presentations on an iPad.

This means that simplicity is a top priority for Haiku Deck, and it mostly nailed it with its first version, but it was frustrating not to be able to add lists of items or make basic image edits and create simple charts without leaving the app. In other words, these new options make the app much more functional, without betraying its philosophy and ease of use.

While cropping and resizing options mean that users are now more likely to upload their own photos, the app’s main asset remains its instant picture search feature, which uses keywords in your slides to find relevant and high-quality Creative Commons images.

Haiku Deck is primarily an iPad app, and you will need a tablet to create a slide show, but these can then be exported and displayed on laptops, mobile devices and external screens in several formats, including PowerPoint and PDF. Depending on each user’s privacy preferences, they can also be shared via the Internet, emails and social networks.

According to its founder and CEO, Adam Tratt,  these new features could help Haiku Deck conquer business users, who have previously shown interest in the app:

We already have a huge community of people using Haiku Deck to close sales, pitch their products, and create rich content. The number of people using their iPads for work is growing, and we saw an opportunity to keep infusing productivity software with fresh thinking. By adding charts, graphs, lists, and other features, while keeping our focus on simplicity and beauty, we’re making it more fun than ever to share an idea or tell an amazing story.

Reaching professional users could also be a good thing for Haiku Deck’s monetization plans. Its business model is freemium, with users getting the option to buy additional themes via in-app purchases if they want to go beyond the five included templates. According to the company, it will add optional premium features in the future, but the core functionality will remain free.

➤  Haiku Deck, via the App Store

Read next: Here are 600 million reasons to replace the Photos app on your iPad with Cooliris