After passing 3 billion monthly mobile page views earlier this month, Wikipedia is receiving major updates to its Web app: users are now able to login with their mobile devices, and create a ‘watchlist’ to follow changes to Wikipedia pages.

With these updates, Wikimedia is aiming to “empower existing users and entice new users to sign up and start contributing.” Wikimedia calls its watchlist feature “the backbone of Wikipedia’s quality,” as it serves to keep spam and vandalism low, while encouraging collaboration between content creators. 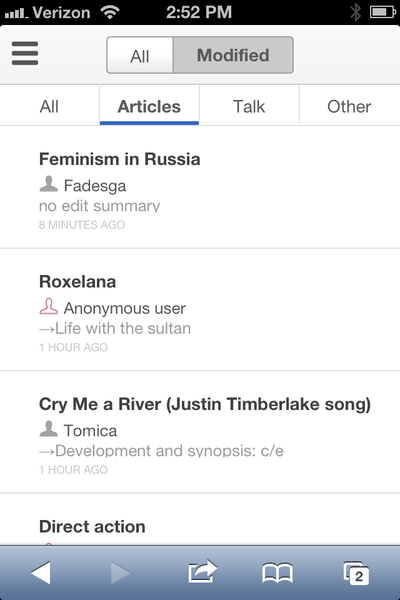 Wikimedia is clearly focusing on bringing its rapidly growing mobile user-base deeper into the Wikipedia community; the company notes it set out to make “viewing the watchlist more newbie-friendly” by designing it to function simultaneously as a reading list.

Wikimedia’s next step, according to the company’s announcement, “will be building and releasing features that allow anyone to add photos to articles, make small edits, and more.” Considering the company is aiming for 4 billion mobile page views by June 2013, it’s a good sign that mobile has become a top priority.

Wikimedia has also kept busy working on its upcoming visual editor, a project to bring WYSIWYG editing to Wikipedia, while supporting 290 different languages — some of which receive very little support online. You can more about that initiative here.