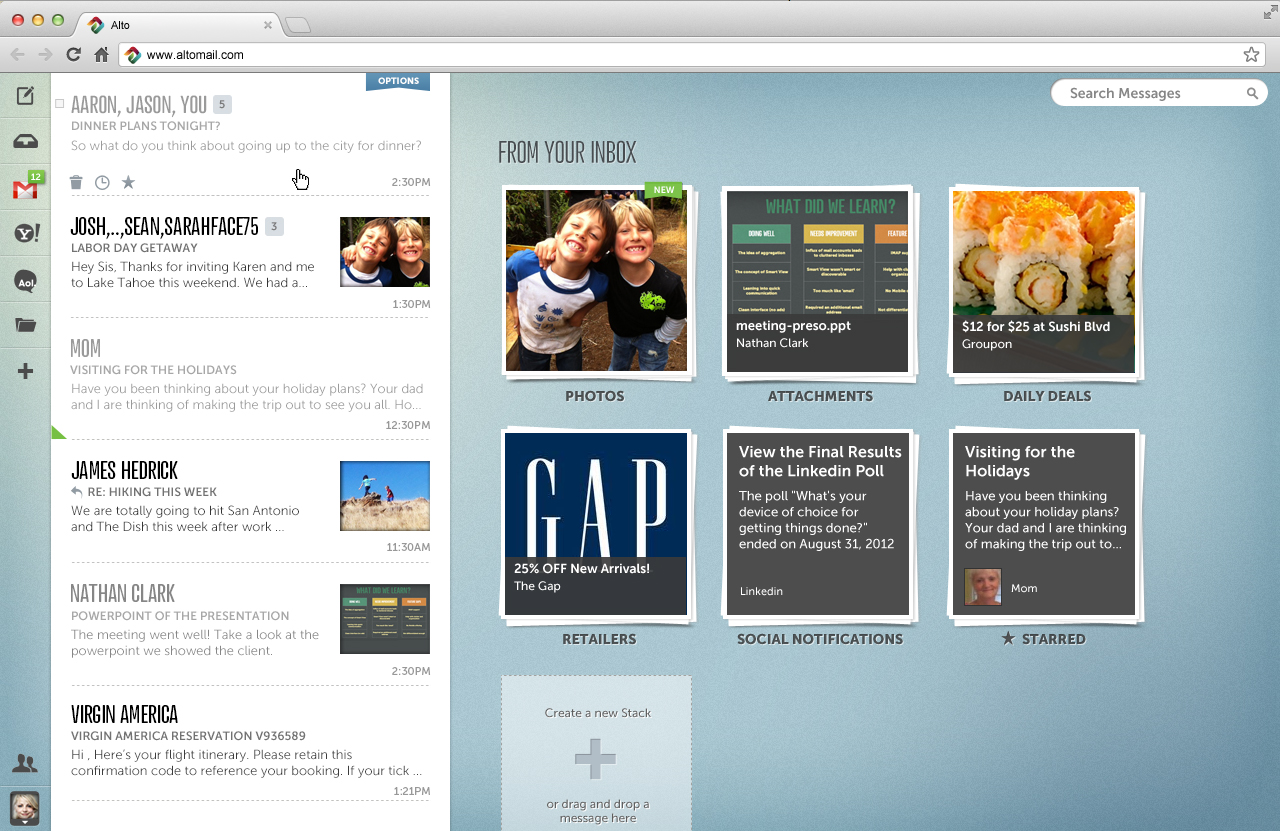 Managing your email accounts can be a bit of a headache. If you’re managing multiple accounts like I am, you probably are managing an exorbitant amount of emails and trying to organize them takes way more time than should be needed. AOL, a company that became known for bringing email to the masses and by coining the famous phrase “You’ve got mail!”, has decided to try and solve the problem with a brand new product geared towards helping users back in control of their email experience.

Called Alto, this cloud-based application can be downloaded and used by anyone to help manage their inbox. This isn’t an upgrade to AOL’s email service, which received a redesign early this summer, but a whole new product that works with a host of other email services, not just AOL: Gmail, Yahoo!, and .Mac. Hotmail integration is not included yet as Alto only works with services where an available IMAP feed is available.

In putting together Alto, the team did some digging around to see what people thought about email in general and also discovered that the average user has between 2-4 email accounts. Taking all of this research into consideration, the final result was Alto and today, the application is being rolled out to a small group of individuals in a preview phase.

Alto will work on both Mac and PC devices and you could think of it as something of a mix between Outlook and Google+ circles. Yes, I know that sounds like a bit extreme, but allow me to explain. When you log into the service, you’ll be able to add in up to five different accounts. They can be all Gmail accounts or a variety of any combination. Through IMAP, your emails, along with your subfolders in those accounts will be imported into Alto.

By default, you will see a single vertical column that displays all your messages. To the right is what AOL calls your “workspace”. It is here where you will create “stacks” to sort your messages (remember what I said about Google+ circles?). AOL’s Senior Director of Product for AOL Mail, Joshua Ramirez, tells us that you can have whatever stacks you want, but a few standard ones they’ve included involve daily deals, social notifications, and retailers.

Alto is a smart program and will learn based off of the user’s behavior. If you wish to begin filtering your emails, you need only drag a single email from Virgin America, Bed, Bath & Beyond or maybe from a friend or family member into the workspace to create a stack. After that, all emails from that sender will automatically be sent to that stack and won’t appear in your inbox on Alto (it will, however, still appear in your webmail inbox).

The application offers users to granular control on determining what email goes where so while you might request all Virgin America emails be sent to a specific stack, you might want to exclude emails relating to your frequent flyer account.

Other cool features of Alto

As Ramirez showed us this new application, one thing he noted was that within each stack, users will also receive some analytics about their messages. Other features include being able to do more contextual and deeper searches, meaning that if you query “website”, you might receive results within emails, photos, and files in all your accounts. What’s more, you can click on any of the results and instantly be taken to that specific message for reference.

If you’re one of those people who usually leaves a message unread as a reminder to come back and read it, then you’ll be glad to know that Alto has a “snooze” feature. Simply read the email whenever you want and then check the setting that allows you to set a reminder for it to pop-up at the top of your inbox. This way, you’ll never miss out on any actionable emails ever again.

Social media is also integrated into the application with the inclusion of Facebook, LinkedIn, and Twitter accounts. By adding these to the app, Alto will pull in feeds from your most recent updates. Additionally, you can click on any of your friends and it will display what you have in common, both in messages and also what friends you have in common with them. You’ll be able to also see all photos and files you’ve shared between the two of you.

Ramirez said the application will be free at first and will not be ad-supported, at least now. They’re not interested in adding traditional advertising on the site like what one might see on Yahoo or Hotmail. He mentioned that multiple options were being considered to monetize the product, perhaps by recommending daily deals to users or additional features.

The anticipated release of Alto to the general public is Q1 of next year.